My sister and I had gone to Odyssey to get ‘Ada’ CD and I was just paying the money for it when guess who entered the shop!! Madhavan!!! :O We were not able to believe it!! We went and said ‘Hi Madhavan!’ and he said Hi. I then said we liked his movie, ‘Evano Oruvan’ very much and he said a Thank you and said he was just back from a shoot. He had come there with his son. I then asked if I can take a photo of his and he said he was just back from a shoot and he was all black. He anyway obliged and I took one with my mobile. We then thanked him and left. We anyway, didn’t want to disturb him.

But the photo has not come out well. 🙁 Considering the excitement in which I was, I would have been surprised had it come out properly. 😉 Anyway, here’s the photo: 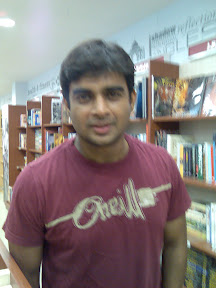 This is the third time I am seeing Madhavan! 🙂 The first time was at Essen Musicals at Alwarpet where he had come along with Simran and Keerthana for the launch or rather promoting the CD/Cassettes of Kannatthil Muthamittal. The second time was at the DVD launch of Mani Ratnam’s movies by Mani himself where Madhavan spoke about his experience of working with Mani Ratnam. So luck struck for the third time today. 🙂