This is my 500th post! A big thanks to each and everyone of you for making this happen! 🙂

A couple of weekends back, I had been to Mayavaram with my family and, as usual, we visited lots of temples. On Sunday, we went to Kudumiyanmalai and on Monday, we went to a whole lot of temples in and around Kumbakonam – Kumbheshwarar, Darasuram, Patteswaram, Baanapureeswarar, Thiruvisainallur SivayOginAtar temple, Thirunthudevankudi Karkateswarar temple, Thirubhuvanam, Thiruloki Sivan and perumAL temples. Almost all these temples are architectural marvels and, needless to say, we were just bowled over by the stunning architectural beauty! 🙂

The road from Pudukottai to Kudumiyanmalai was quite good. There were lots of cashew trees on both sides of the road. I love cashew nuts. 🙂 There is a place called Adanakottai on the way where you can find many people selling roasted cashews on road-side. The cashews are of good quality. So, don’t forget to do some cashew-shopping when you go there. 😉

You can see a lot of peacocks on the Pudukottai-Kudumiyanmalai route usually. We managed to spot 3 peacocks.

As you near Kudumiyanmalai, you can see a rocky hill, right in front of which the temple is.

Kudumiyanmalai has a very old Shiva temple, which is currently being maintained by the Archaeological Survey of India (ASI). The presiding deities of this temple are Shikhagireeshwarar and akhilAnDEshwari. 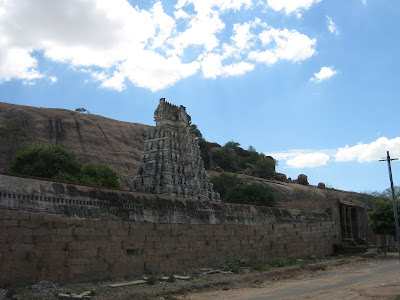 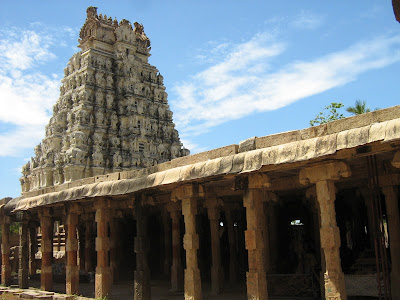 The priest explained the sthala purANam and also told us about some of the sculptures and mandapams in akhilAnDeshwari’s shrine, about which I have written below.

sthala purANam (The story behind the name Kudumiyanmalai)

Before this place was called Kudumiyanmalai, its name was Thirunalankunram.

Legend goes that the king used to visit the temple everyday in the evening and it was customary for the priest to give the prasAd to the king after the evening pUja. One evening, it was getting late and King Sundarapandian had still not come. Since the closing time of the temple was nearing, the priest gave the prasAd to the dAsis who danced everyday at the temple. Seeing the king enter the temple just as the dAsis were leaving, the priest got worried and took the flowers from the dAsis who had already worn it on their hair and gave it to the king. Seeing a strand of hair on the flower, the king became suspicious and questioned the priest about the presence of hair in the flowers. Overcome by fear, the priest lied that it was from Lord Shiva’s head. Angered by the priest’s reply, the king locked him inside the temple, telling him that he would come the next day and check if the Lord did really have hair. Worried, the priest prayed to the Lord.

Just as you enter the temple, you will be greeted by lots of monkeys playing freely on all the pillars. 🙂 On both sides of the corridor from the entrance to the sanctum sanctorum housing ShikhagirIshwarar are pillars having huge, beautiful sculptures. 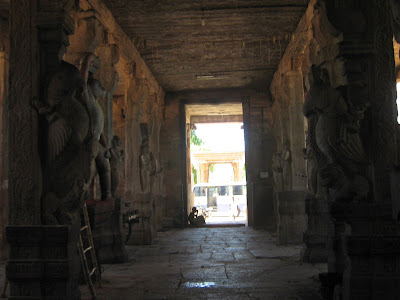 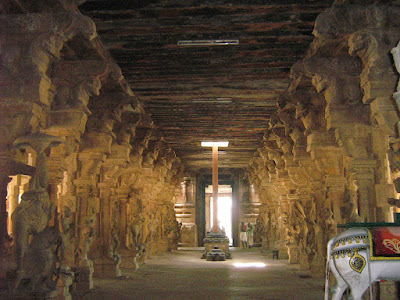 The pillars in the outer corridor have sculptures of Hanuman, some of the avatArs of Vishnu, etc. 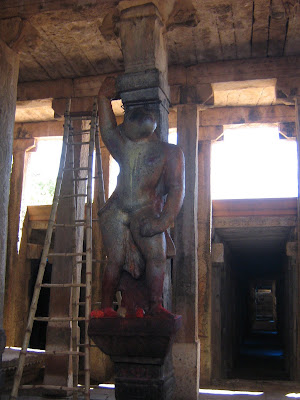 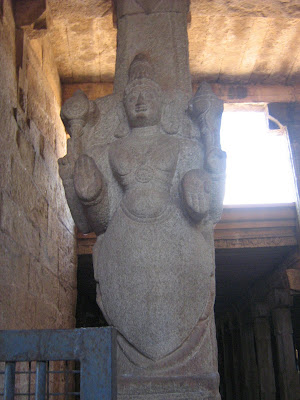 The pillars in the inner corridor has sculptures of Shiva, Parvati, Vinayaka, Muruga, Shiva in UrdhvatANDava, Narasimha, etc. 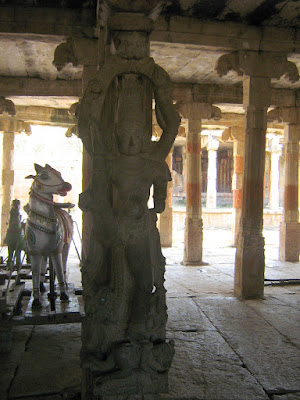 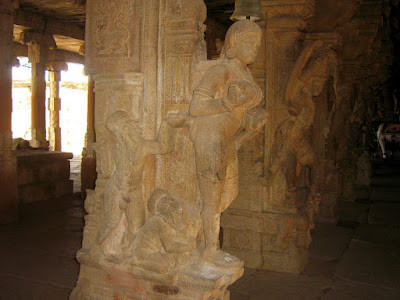 Some of the sculptures are damaged. 🙁 It feels sad to see broken arms etc. on the otherwise very beautiful sculptures. 🙁 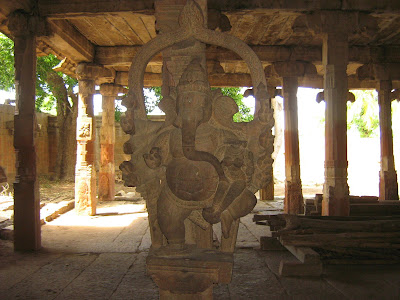 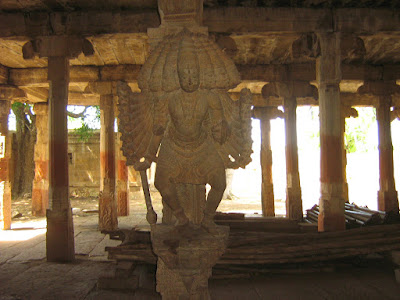 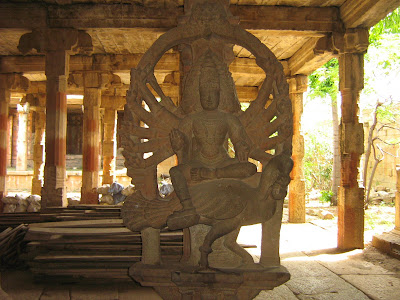 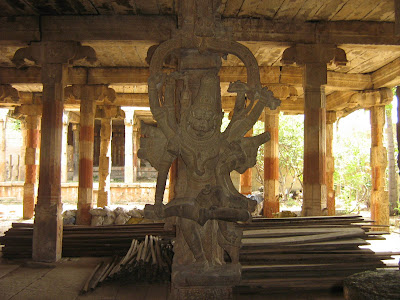 There was a power failure when we went and it was quite dark inside the temple except for the light from lamps. The main Shiva linga itself wasn’t clearly visible. That’s when my awe for all those sculptors and workers who would have built this temple, increased even more! Where was electricity in those days? Didn’t they carve all those beautiful, intricately-carved sculptures with just the light from lamps? How difficult it must have been for them to work in inadequate light and yet give so much attention to so many details in each of the sculptures carved! How skilled they must have been! Wow! 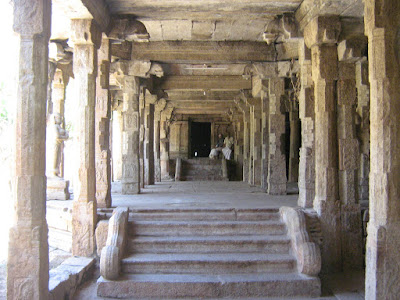 When you enter it from outside, to the right is the old idol of akhilAndEshwari. This was replaced by the one present in the sanctum sanctorum now, since the old one got damaged.

After that is the rAsi mandapam. The ceiling of the mandapam has sculptures of all the 12 raasis. 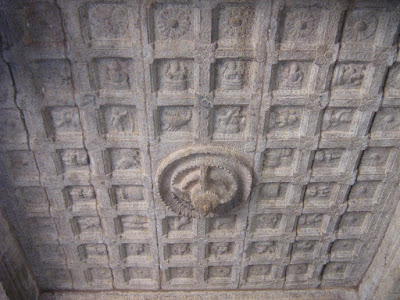 On the right side of the rAsi mandapam is a door. There were beautiful sculptures, including that of anRil paravai (bird with two heads and one body), bordering the door. 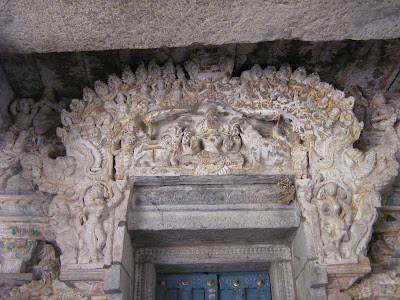 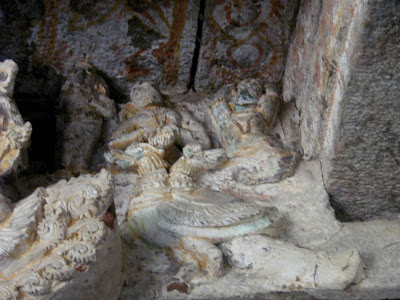 After that is the hexagon-shaped mandapam made of a single piece of stone. This was where the king was crowned. Nowadays, weddings take place here.

Right from the entrance to akhilAndEshwari’s shrine till the sanctum sanctorum, there are pillars with miniature sculptures/designs carved on them. 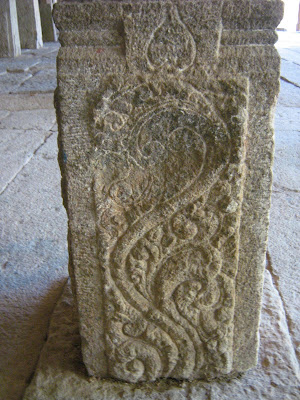 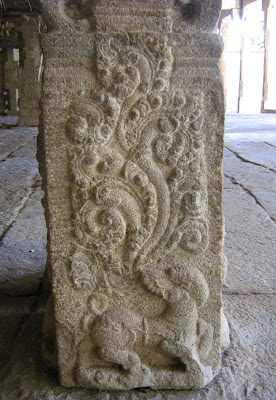 There were sculptures of dancers. Were those that of dAsis who danced at the temple? 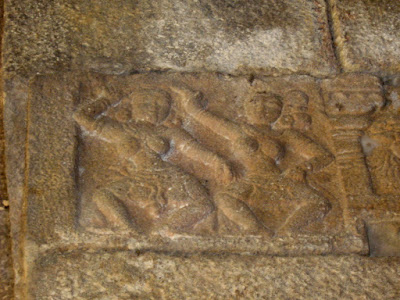 Sculptures in the temple apart, there are clearly-visible sculptures of Shiva and Parvati on rishaba, along with 63 nAyanArs carved on the hill!

There are lots of inscriptions on the temple walls. 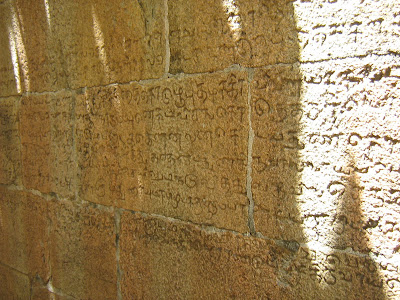 Outside the temple is a mandapam having pillars. After the mandapam are rows of pillars. Maybe there was a long mandapam which is now gone? 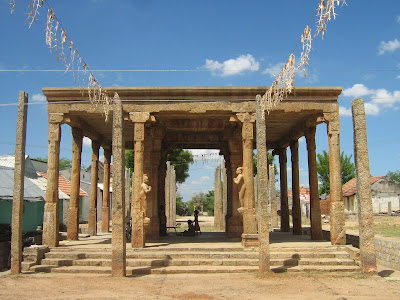 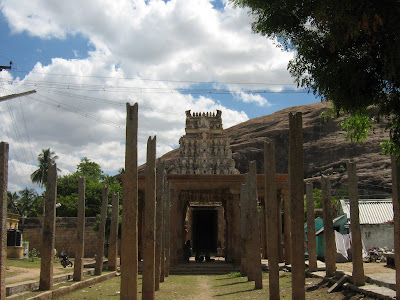 After the pillars is nandi in a small mandapam. After that is the road, on the other side of which is the thEr broken into pieces and lying in ruins! 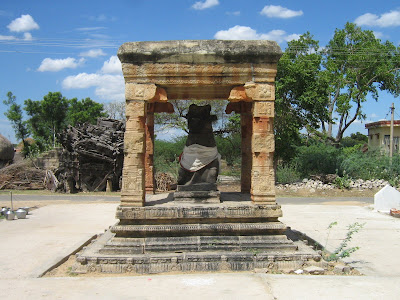 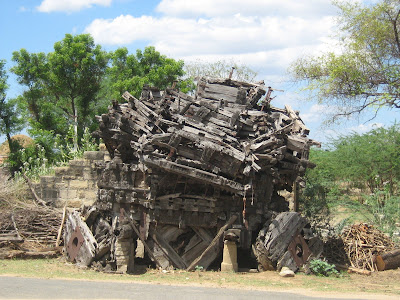 Time for some History 😉

While the sanctum was built by the Cholas, the outer portions were architecturally expanded by the Pandyas and the Vijayanagara kings. Thanks to attending Chithra Madhavan’s lectures, I was able to correctly identify that there must have been Vijayanagar’s contribution to the temple. 🙂 The sculptures of some of the dasAvatArs of Vishnu was one of the things that made me think Vijayanagaras might have added to the temple, since it was during their time that sculptures of dasAvatArs became popular.

Temple on the hill

There is a cave temple in the hill. We didn’t know about that and hence, we didn’t visit it. 🙁

Some time back, there was an article on Kudumiyanmalai in ‘The Hindu’s’ Friday Review which has lots of information about the temple. I didn’t read it at that time and remembered it only after I visited the temple and read it later. Here’s the link to that article.

Quoting the lines relevant to this post, from the article,

The Kuduminatha temple came a few centuries after the cave temple, sometime in the 10th century. Built by the Cholas, it was renovated by the Pandyas in the 13th century and by the Vijayanagar Kings in the 15th. There is what is called a 1,000-pillared mandapam at the entrance, which, however, has only 645 pillars. The sculptures here are of Vijayanagar style. Here one finds figures of Hanuman, Sugreeva and Vali. Completely smeared with butter and vermilion, it is not possible to take in the beauty of the sculpture.

In the Vasantha mandapam, the sculpture of Nrisimha tearing out the entrails of Hiranayakasipu, captures attention with its expression. The agony of a terrified Hiranyakasipu, whose hands and legs are held in vice like grip by the ferocious man-animal. The Rati and Manmadha figures are noteworthy for their attention to detail. The Siva in Urdhva tandava pose is a masterpiece. There are also two sculptures of soldiers on horseback, trampling down their enemies.