A talk by Dr. Chithra Madhavan on 17th January at Tattvaloka

Till whatever I have written in the previous post, no photos were shown during the talk. But once Chithra started speaking about the temples in Kanchipuram, she showed lots of photos of each temple and for a major part, spoke about whatever was shown. kailAsanAthar temple was the first temple that was covered. Luckily, I have some photos of kailAsanAthar temple which, as you might know, I had taken when I had been there quite sometime back.

This temple was built by King Rajasimha (627 AD – 729 AD) in the early 8th century AD. This temple is currently being maintained by the Architectural Survey of India (ASI). 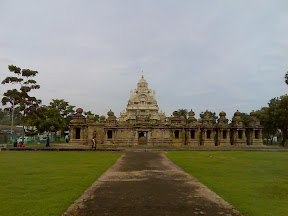 Though the temple itself is made of sandstone & not granite, its foundation has granite. This sandstone is now brittle. Apart from Shore temple at Mahabalipuram, which was built before this, this is another structural stone temple in Tamil Nadu.
The original name of this temple is rAjasimhEshwara. The inscriptions here too refer to it by that name. The inscription also says that this house rivaled Mount Kailasa itself.

The white structure that one can see in the front in this temple (a photo of it was shown) is mahEndravarmEshwara griham. 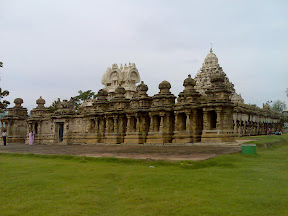 (I think the one you can see on the front in this photo is the one. Not sure though! Please do let me know if you know)

This is also a shrine of Shiva and has a Shiva lingam. The entrance gateway to mahEndravarmEshwara griham having a gOpuram happens to be the first gOpuram of Tamil Nadu. The gOpuram has today become such a significant feature of temples in Tamil Nadu that the symbol of TN Govt. itself is a gOpuram.

Assuming that this is the correct gOpuram, here’s a close-up of that gOpuram: 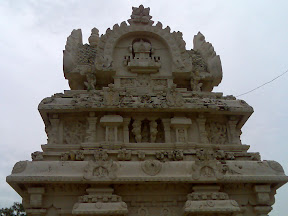 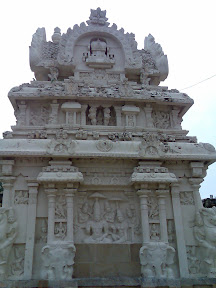 Even though the rAjasimhEshwara and mahEndravarmEshwara griham shrines have Shiva lingams now, those were not there when the temple was built. The Pallavas worshipped only sOmAskanda (Shiva with Parvati and Muruga; sOmAskanda = sa + uma + skanda) and sculpture of sOmAskansda can be seen on the rear wall behind the Shiva lingas. The lingas were placed there by other rulers later on. Same is the case with the lingas on the sub-shrines outside the main temple too. Here’s a photo of the sub-shrines outside and the linga (with the sOmAskanda in the backdrop??) in one of those sub-shrines: 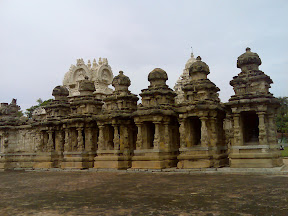 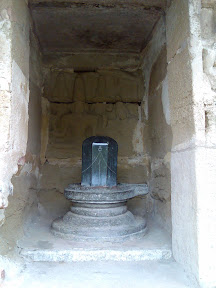 This temple has 58 sub-shrines with each one having sculptures (plastering has ruined some now). 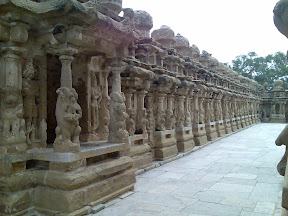 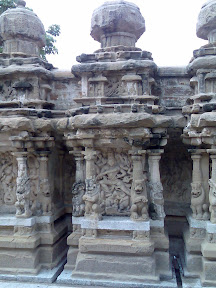 There is an inner circumambulatory passage too through which one has to crouch and almost crawl and go in some places.

(A photo of a manTapa was shown)

Kanchi was a centre of education & learning and there existed a ghaTika (institution of learning) in Kanchi even before the Pallava period. Mayurasharman, a Brahmin, who was from Goa, has mentioned in an inscription at Shimoga that he went to the ghaTika at Kanchi with his guru Veerasharman. Since Pallavas were patrons of ghaTika, the ghaTika gained stature during their period. Dr. Meenakshi, an archeologist who happens to be the first lady to get a Ph.D from the University of Madras, has said that a ghaTika might have been there in kailAsanatha temple. Kanchipuram was also a Buddhist & Jain centre of learning.

King Vikramaditya invaded Kanchipuram and he was fascinated by this temple so much that he had dedicated all the booties to this temple. There is an inscription of his in the temple in which this is mentioned. He even took the architect Sarvasiddhi, who had built the Kailasanatha temple, to Pattadakkal and built a temple similar to this one there. That temple is the virupAksha temple.

There are a lot of inscriptions of King Rajasimha (Narasimha Varman 2nd) in this temple. The inscriptions, which are in Sankrit written in Granta script, have been inscribed using wonderful calligraphy, with those appearing like flowers, creepers, etc. About 250 titles of Rajasimha are mentioned in the inscriptions. Some of his titles are dharmanityaha, Agamakriyaha, satyasandA, AgamAnusAri (follower of AgamA) and one more which means ‘master of GajashAstra’. Rajasimha was a great patron of music and dance (one of his ladies, whose name I don’t remember, was a dancer).

Most of the sculptures, including one of Narasimha, are made of a single piece of sandstone. 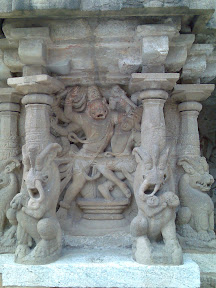 All the Pallava sculptures have an entire panel full of sculptures. Every panel has sculptures of 2 lions. 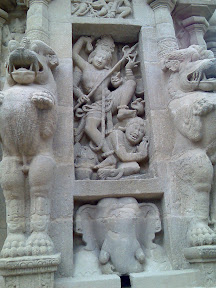 Some of the sculptures photos of which were shown are: 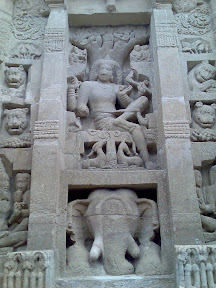 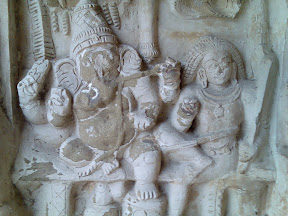 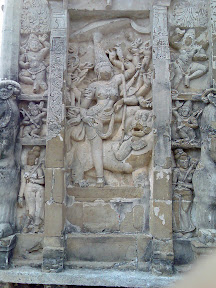 Pallavas were ardent worshippers of Goddess Durga. Some people even gave their heads in worship to the Goddess!

There is a Nandi made of sandstone outside the temple. It had a manTapa once. It’s not there now. 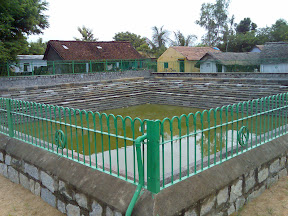 The paintings on the walls date back to the Pallava period during 8th century. These Pallava paintings are all vegetable dye paintings. You can see the colour paintings here: 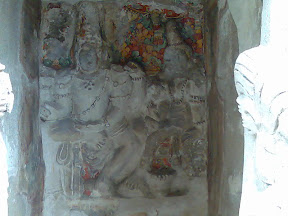 This temple is full of parrots. I too spotted quite a few when I went there. 🙂 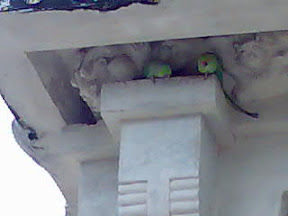 P.S.: Click on the photos for a larger size image.
P.S.1: I will try to write the next post soon. There won’t be any photos in that though.