Music, Nature & Walking – The top three things which always inspire me. It was one of those lovely mornings with overcast sky and the water in Rochor Canal, Singapore relatively clean. And there I was going for a brisk walk along the canal pushing the stroller of my little one. 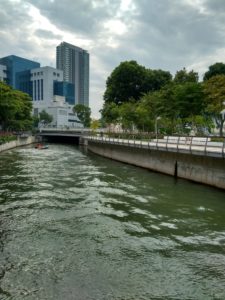 I only wish the lazy-me could someday get to wake up early and walk along the canal during sunrise, so that I can enjoy the reflection of the sun’s golden rays on the canal water. Walks like these always have me pondering over a lot of things. My life in Singapore revolves around this canal simply because I live right on its banks.

Back in July 2012 when I first came to Singapore, the cleaning and upgradation works of this canal was in progress. To me, my first stint of about 8 months in Singapore will always be synonymous with the loud noise all through the day from breaking of the canal walls and the pedestrian bridge and the cleaning of water. My days back then would be filled with several scared crying spells from my daughter caused because of all those loud noise. 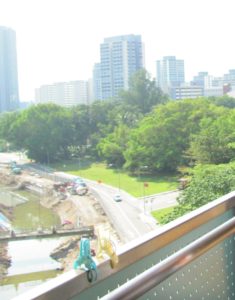 Back then, these birds would visit the canal once in a while. I don’t see it here anymore. 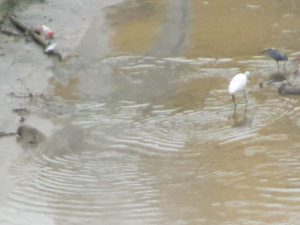 The birds & the muddy water in Rochor Canal, August 2012

I have witnessed the transformation of Rochor Canal to what it is today – a canal with relatively clean water most part of the time (the water made clean by regular clearing of all the garbage from it by workers sailing on boats all day long!), a canal with neat pedestrian walkways and benches on both its banks, a canal with its dose of greenery on its banks (the now growing trees once brought from elsewhere as small growing trees and transplanted right onto the soil here!), a canal which is home to fish and a few turtles and even on rare occasions, monitor lizards, a canal around which mynahs, pigeons, doves, golden orioles, sparrows and sunbirds are a common sight, a canal which sees several fitness freaks regularly walking and running on its banks and above all, a canal which has and still is providing livelihood to numerous immigrant workers. It is another fact that I still wonder why it took so long for all the restoration work to be completed since all the work officially got over only in March 2015! 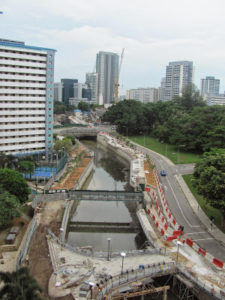 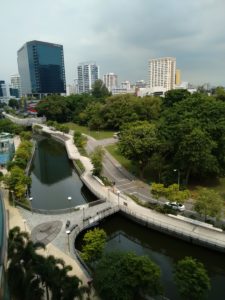 Rochor Canal & the greenery around, September 2016

The now defunct Muslim cemetery across the Rochor Canal Road has a thick pocket of greenery filled with meadows and a thick tree cover which serves as a natural habitat for some birds like orioles and mynahs and butterflies. The sight of a golden oriole dashing across the canal or the teeny tiny cute sunbird flying from one flower to another on the mini rain gardens along the canal banks continue to thrill the nature-lover in me. 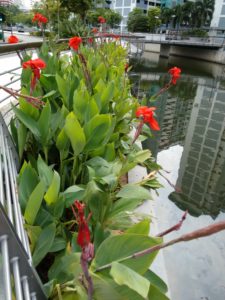 Mini Rain Garden along the canal

The kids enjoy watching the different types of boats used by workers cleaning the canal. They enjoy seeing the fish and the turtles. My daughter loves seeing the colours of rainbow occasionally on the water, caused by maybe a trace of oil on it?

This Rochor Canal upgradation work is synonymous with all that I have seen Singapore to be during my last few years of stay here –  constant upgradation to all the places – be it HDB (Housing Development Board) apartment buildings or places of interest, signboards and info boards everywhere – a sure shot way to attract the tourists (some of the names of the bridges along Rochor Canal is, in my opinion, over-hyped), regular cleaning of all public places, having greenery everywhere in order to attain their ‘City in a Garden’ dream! 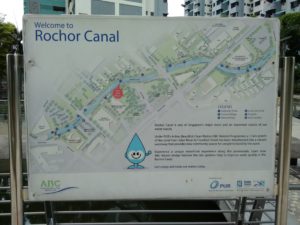 Nowadays, I see a few tourists visiting this canal during the day and taking photographs on the bridges. Though I wouldn’t label it as a place for international tourists to visit in Singapore, for the residents here who love going for walks, they should definitely take a stroll along the canal at least once.

Everytime I think about the immense work which the workers did and still do and the way the canal has today turned out to be, my mind automatically starts dreaming about how great it would be if only my neighbourhood canal in Madras – the stinking Buckingham Canal – can also get transformed like this! How many times have we heard about the possibility of Cooum-cleanup happening in Singapore style!