Celebrating 20 years of Alaipayuthey with 20 specialties of the movie. 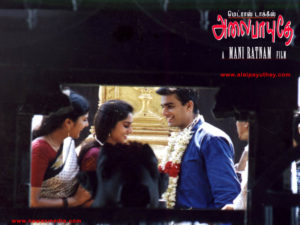 Be it the happy, vibrant colours of Shakti’s salwar kameez or Karthik’s blue shirts or the scenery in Pacchai Nirame or the rich Indian colours during functions in Yaro Yarodi, Alaipayuthey or Mangalyam songs or be it the dark tone when the movie takes on a serious note in the second half. The colours by themselves match the scene in every single frame.

The colour palette, lighting and cinematography combine to give us some stunning visuals. The duller tones too leave as much an impact as the vibrant tones. If the duller tones in the hospital match the grim mood, the brightly-lit scenes in the railway station during their initial meetings matche the carefree mood.

At first glance, there really might be nothing special about the costumes, since the costumes were what every other person normally wore back then – salwar kameez or a saree for the girl and a shirt and a pant for the guy. But look at the colours, the texture and the accessories to go with them. Simple, yet chic. The characters looked like one among us. 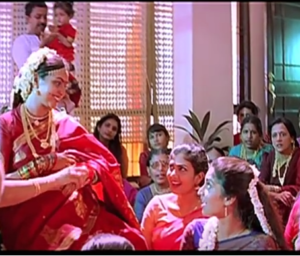 It wasn’t just their costumes, the characters themselves looked like one among us. Everyone from the Nadar kadai owner to the little niece of Karthik to the gang of friends to Shakti’s sister to the mother who might scold, yet is totally concerned about her daughter, you can relate to almost everyone from the movie.

Karthik and Shakti have their own circle of friends and you see how their friendships too are depicted so realistically. Even the houseowner turns a friend and well-wisher to Karthik during the difficult times.

8. Life and its Uncertainties

The movie is a lesson in itself on life and its uncertainties. Be it Shakti missing the opportunity to see her father or be it the accident that happens to Shakti, you see how one moment changes life itself altogether. There is no going back in life. Karthik rushes to share his happiness of getting a project contract with his wife, only to first experience worry and anxiety in not being able to find her and later gets a shock when he comes to know that she has met with an accident.

9. The Happy Days – As happy as only Mani Ratnam can create!

Seriousness apart, will there be anyone who doesn’t enjoy the scenes from the time when Karthik and Shakti first meet in Yaro Yarodi song till real friction starts between them? ‘Naan Onna Virumabala’, the mock fight scene, the thaali hiding scene, the list is endless.

Recollecting what Mani Ratnam said in one of his interviews a decade back, real love story starts only after a marriage when each starts making adjustments and changes to their life and lifestyles. He shifts the focus from initial happy days to little arguments to complete silence to distrust to finally getting back together. The words of the house owner and the conversations between Meera and Ram, all focus on what married life is all about.

Which Chennaiite will not love seeing their city come alive on screen? Besant Nagar, Kapaleeswarar temple, beach, the buses and suburban trains, ….. 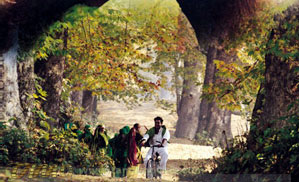 The fort of Maheshwar in Snehithane. The greenery and scenery of Kashmir and other places in Pacchai Nirame. A medical camp in Evano Oruvan. Beach in September Madham. The busy city roads and a happy, smiling Madhavan in Enrenrum Punnagai. The unfinished, unpainted brick-walls of the apartment in Kadhal Sadugudu. A colourful small gathering of folks in a function in Alaipyuthey. A grand, village wedding in Yaro Yarodi. A quick, secret wedding in Mangalyam. Each song had a special location and is very beautifully shot. In fact, if I am right, Alaipayuthey happens to be the last film in which Mani Ratnam shot all the songs fully. To think that, he initially didn’t want songs in the movie!!!!

You have a group of dancers in some parts of Snehithane and Pacchai Nirame, yet they are there just blending into the scenes. Kadhal Sadugudu has just Karthik and Shakti all through. September Madham has a group of friends partying. The way each song is choreographed makes them all the more memorable.

All the songs continue to be as evergreen as THE real evergreen song – pacchai nirame. There is a song for every mood in this movie – joyous, romantic, pathos, partying…. Yet, as always, I wonder why there isn’t a proper duet song when the movie in question is actually a romantic love story!

The classic tune of Pacchai Nirame. The Hindustani tunes in some scenes featuring Shakti and her sister. The drum beats and happy music when Poorni and her ex-fiance get back together. The serious music in the hospital. The scenes have such apt background music blending with them.

Should I actually elaborate anything on this point? 😉 Is there anyone who didn’t go crazy seeing Madhavan riding a bike with his sunglasses and headphones on?

Shalini as the smiling young college student, as a doctor and as a lady torn over whether to go against her husband’s words or not and later drowning in sorrow and guilt suits the role of Shakti perfectly.

The trains, the mirror, the rain – these typical features in Mani Ratnam’s films add a magical touch to Alaipayuthey too. These apart, every scene has classic Mani Ratnam’s touch written all over it. He is one man who can make a love story as classy as a serious storyline involving riots and terrorism.

Finally, the name ‘Alaipayuthey’ itself has always fascinated me. The title doesn’t give a clue as to what the storyline is. The Carnatic song ‘Alaipayuthey’ is featured in a function in the movie and you have Karthik and Shakti stealing glances at each other. In the classical song, the devotee’s heart goes ‘Alaipayuthey’ on Lord Krishna’s flute. Forget about how Shakti’s heart went ‘alaipayuthey’ when she saw Karthik, I, for one, can tell you that I have always gone gaga over ‘Alaipayuthey’ right from the first time I saw the movie till today!