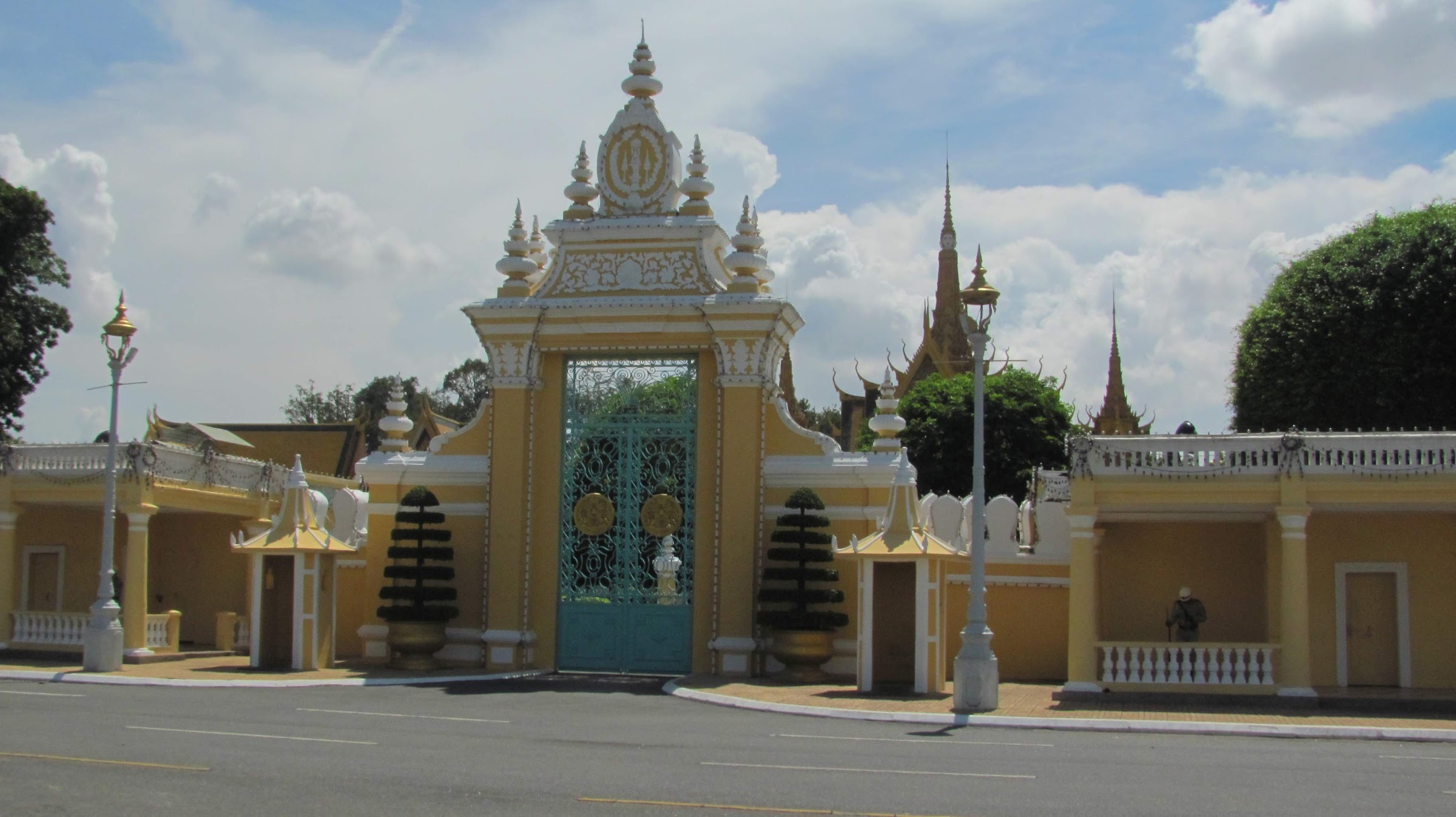 Cambodia is a country which still has a king and the Royal Palace at Phnom Penh, the capital city of Cambodia, happens to be the king’s palace. Built in 1866, this palace is indeed a new structure compared to all the real heritage structures dating to as early as 9th century AD in the region around Angkor Wat. The Royal Palace is supposedly built in typical Khmer architecture with influences from French too because of the French colonization of Cambodia in the 19th century. The Palace complex houses several buildings like the royal throne and Silver Pagoda and several structures including stupas and statues of erstwhile kings. 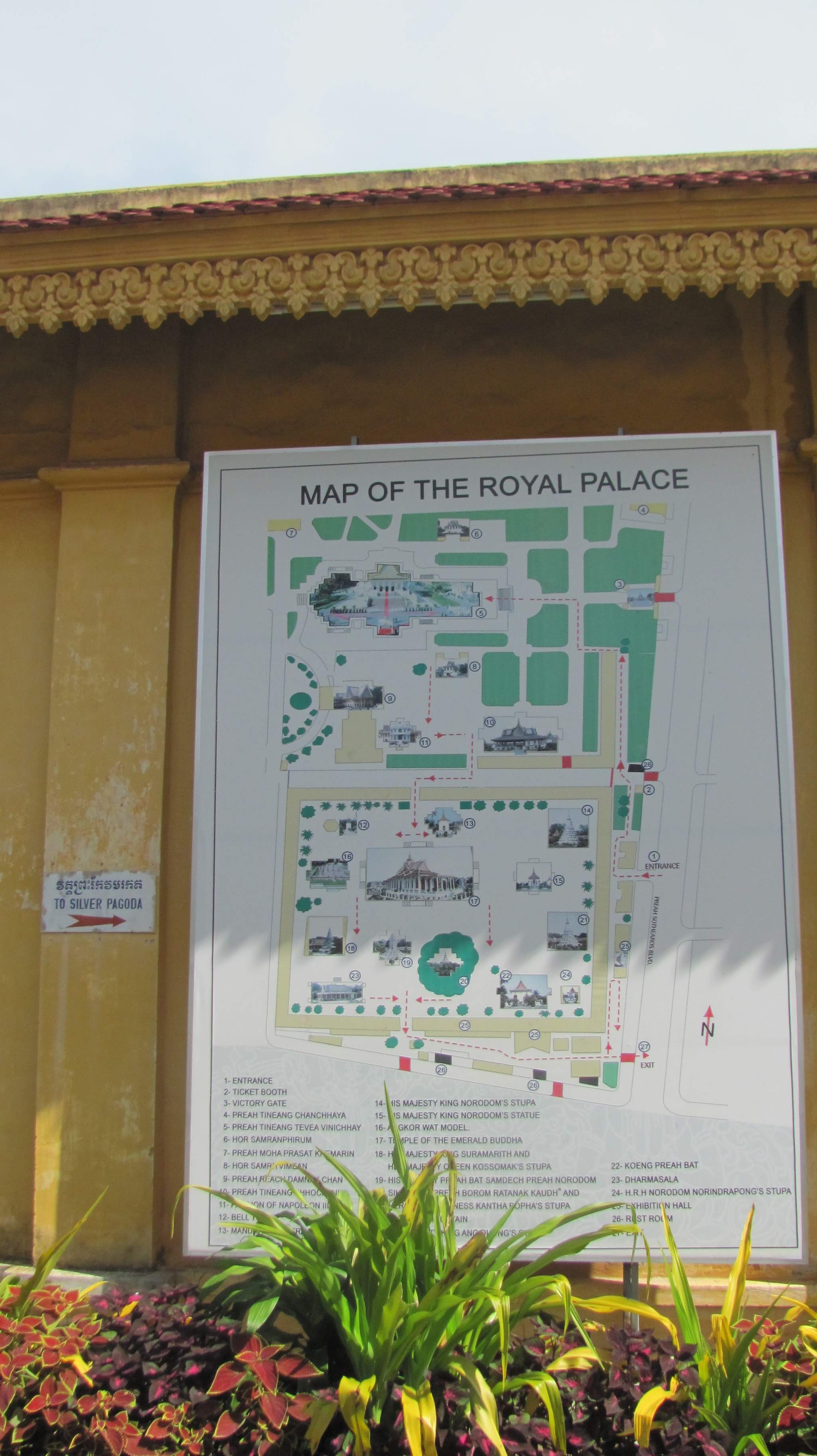 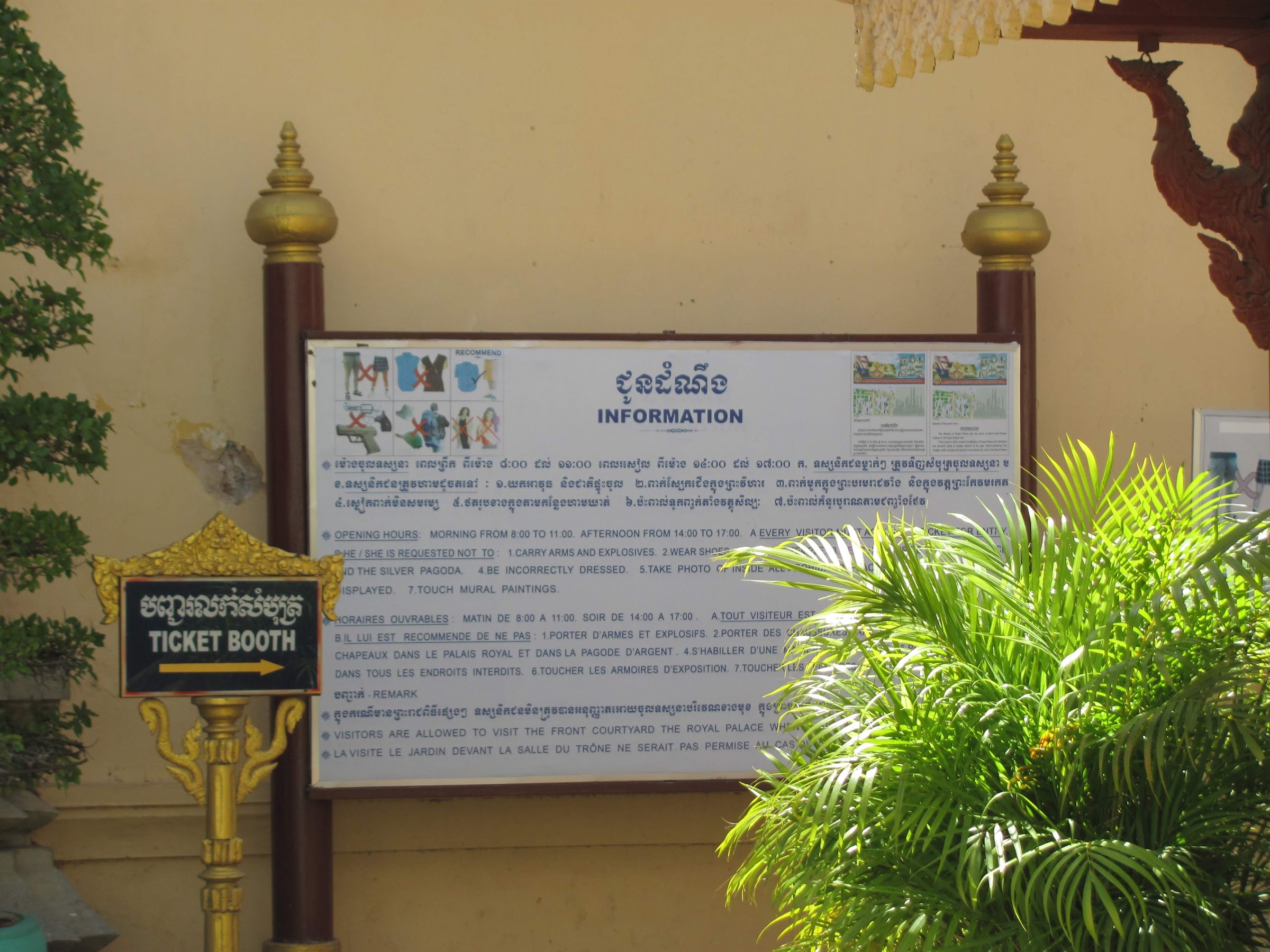 Opening Hours: 8 am to 11 am, 2pm to 5pm
Ticket: 10 $ (USD) for all 6 years old and above. One can hire a Tour Guides at additional cost.
Dress Code: Any dress with shoulders and knees covered 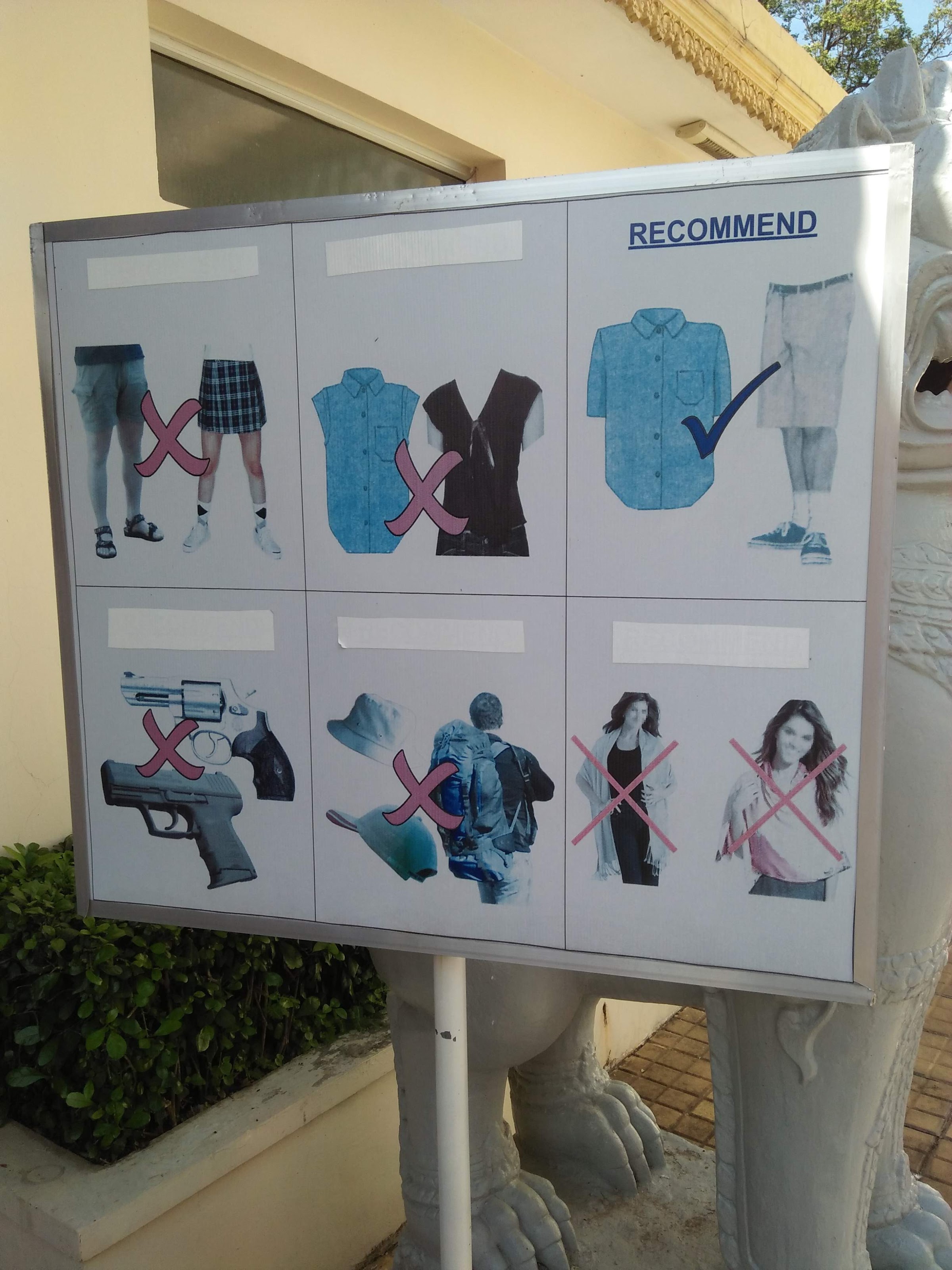 Tips: Keep yourself hydrated. It gets very hot and humid on sunny days. Near the exit of the palace, free water bottles are given to all visitors.
For those visiting in the afternoon, people start queuing up by 1:45 pm itself for buying the tickets. But the queue moves fast. 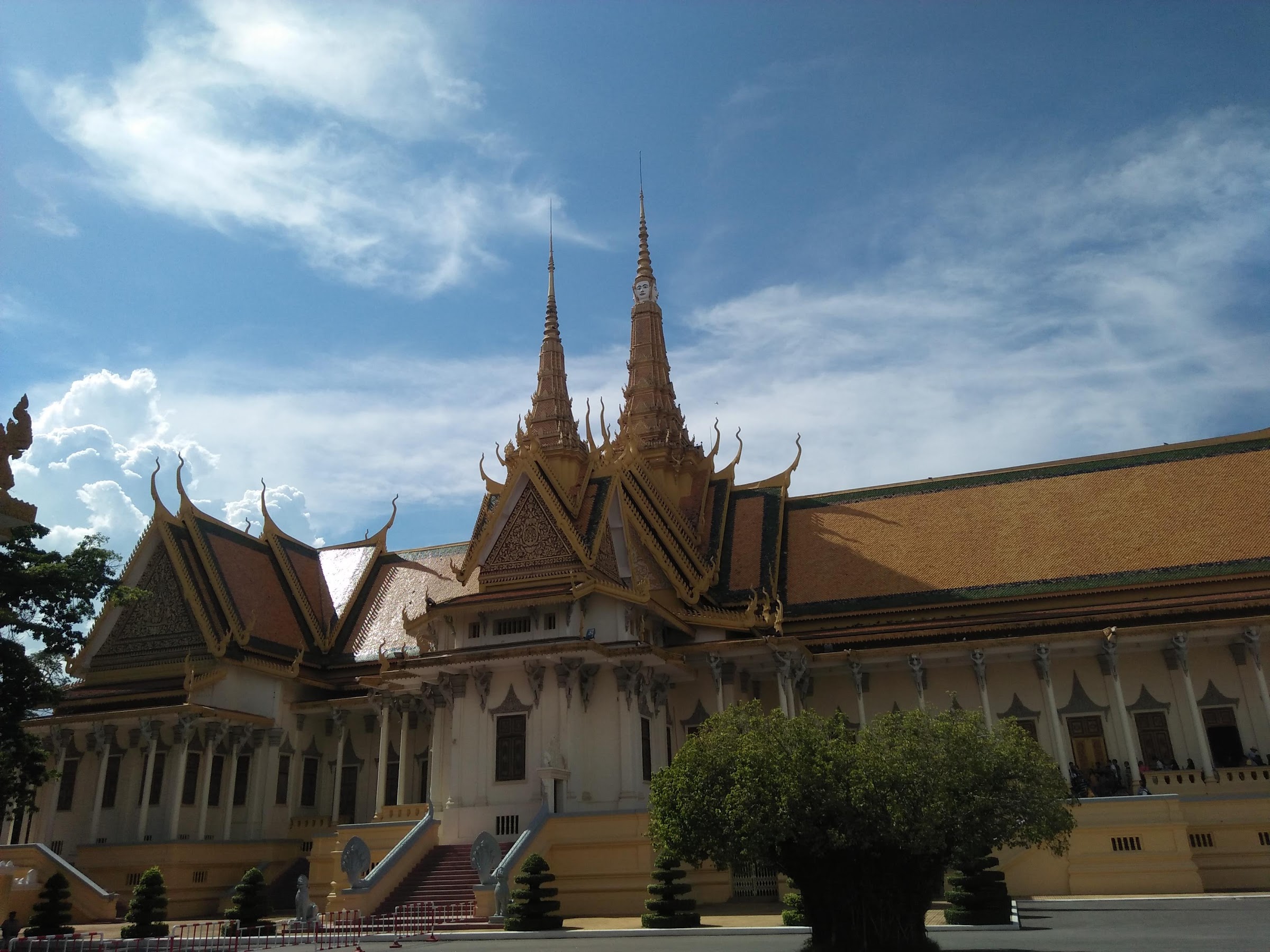 This throne hall is where the king holds his meetings with officials. The hall with its royal chairs looked grand. Photography is not permitted inside the interiors. 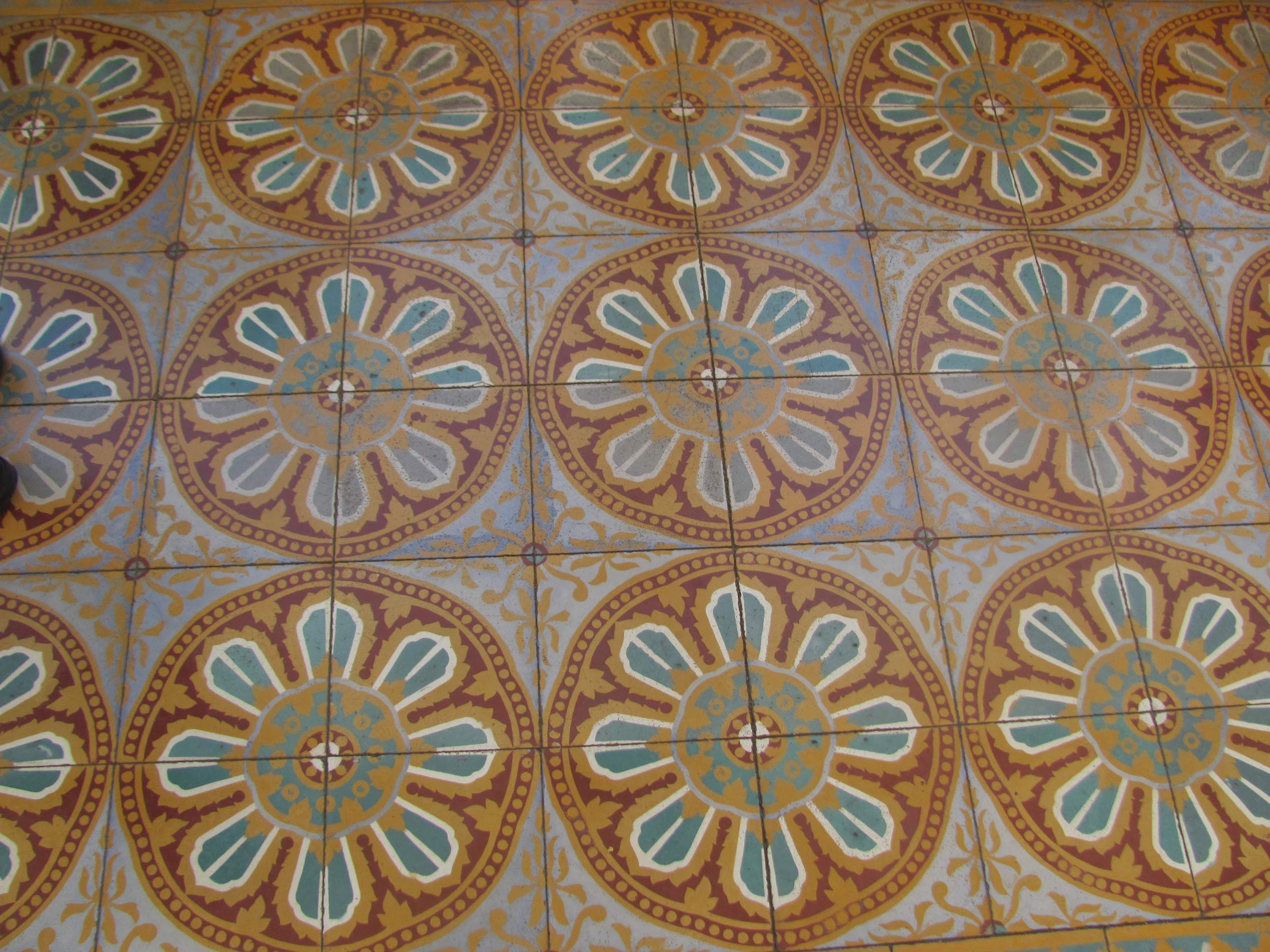 This is the flooring all through matching the golden and maroon colour themes of the palace buildings. But, I expected something even grander than this.

This building is supposed to be the royal rest house. 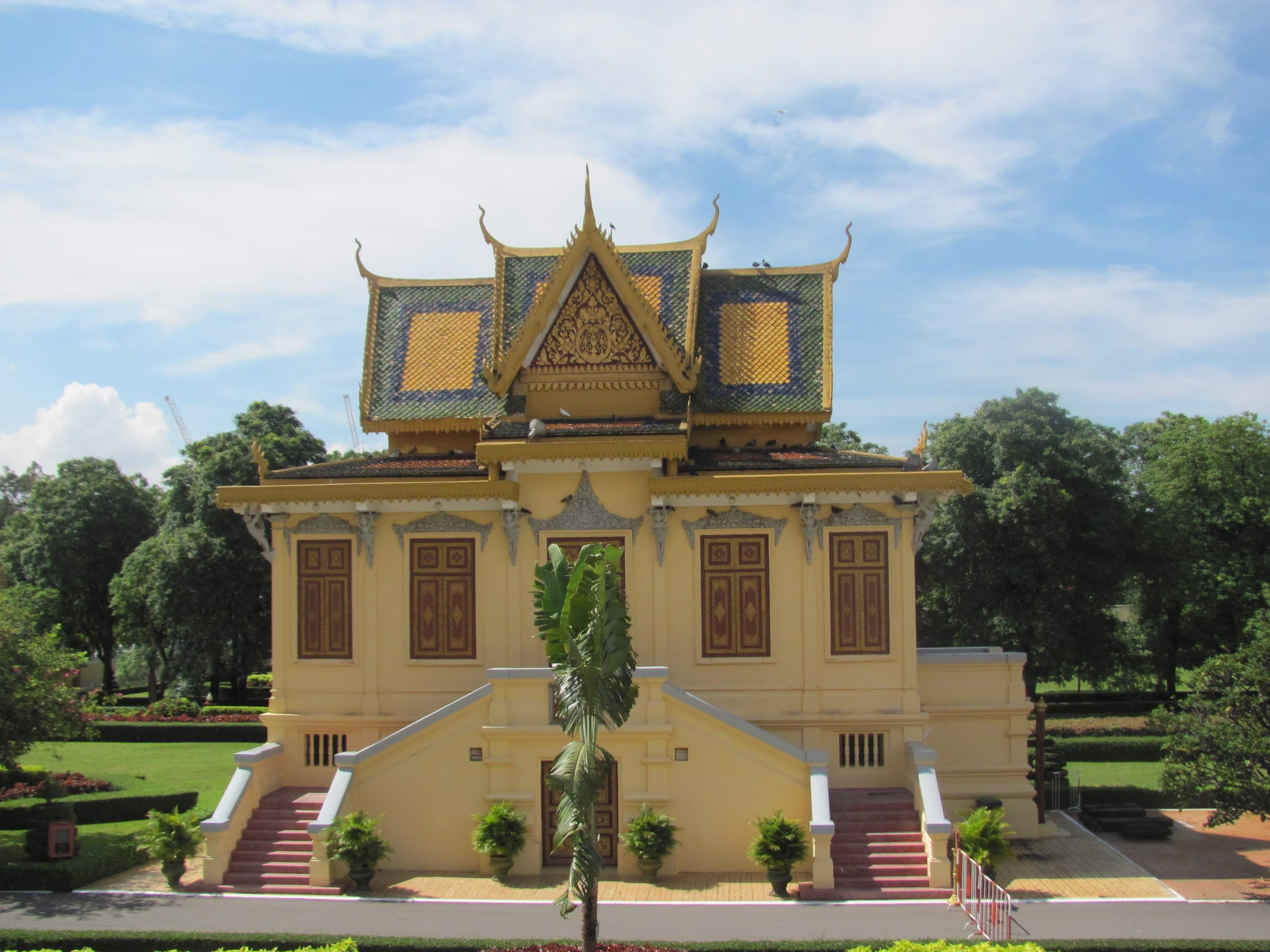 All the main buildings in the palace complex and and other Wats (Wat – temple/Buddhist pagoda in the local Khmer language) in Cambodia have these lovely gold and maroon combination. 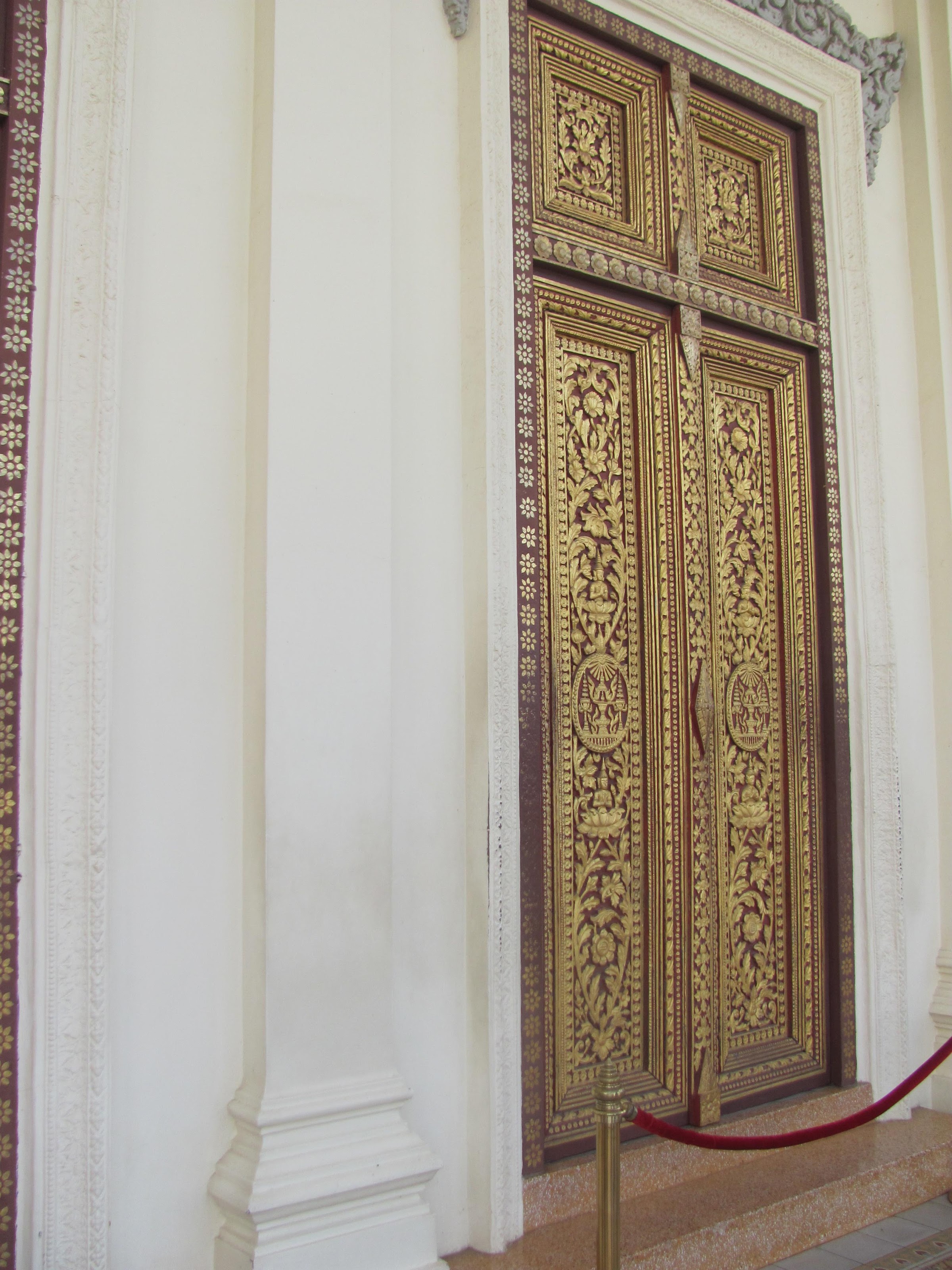 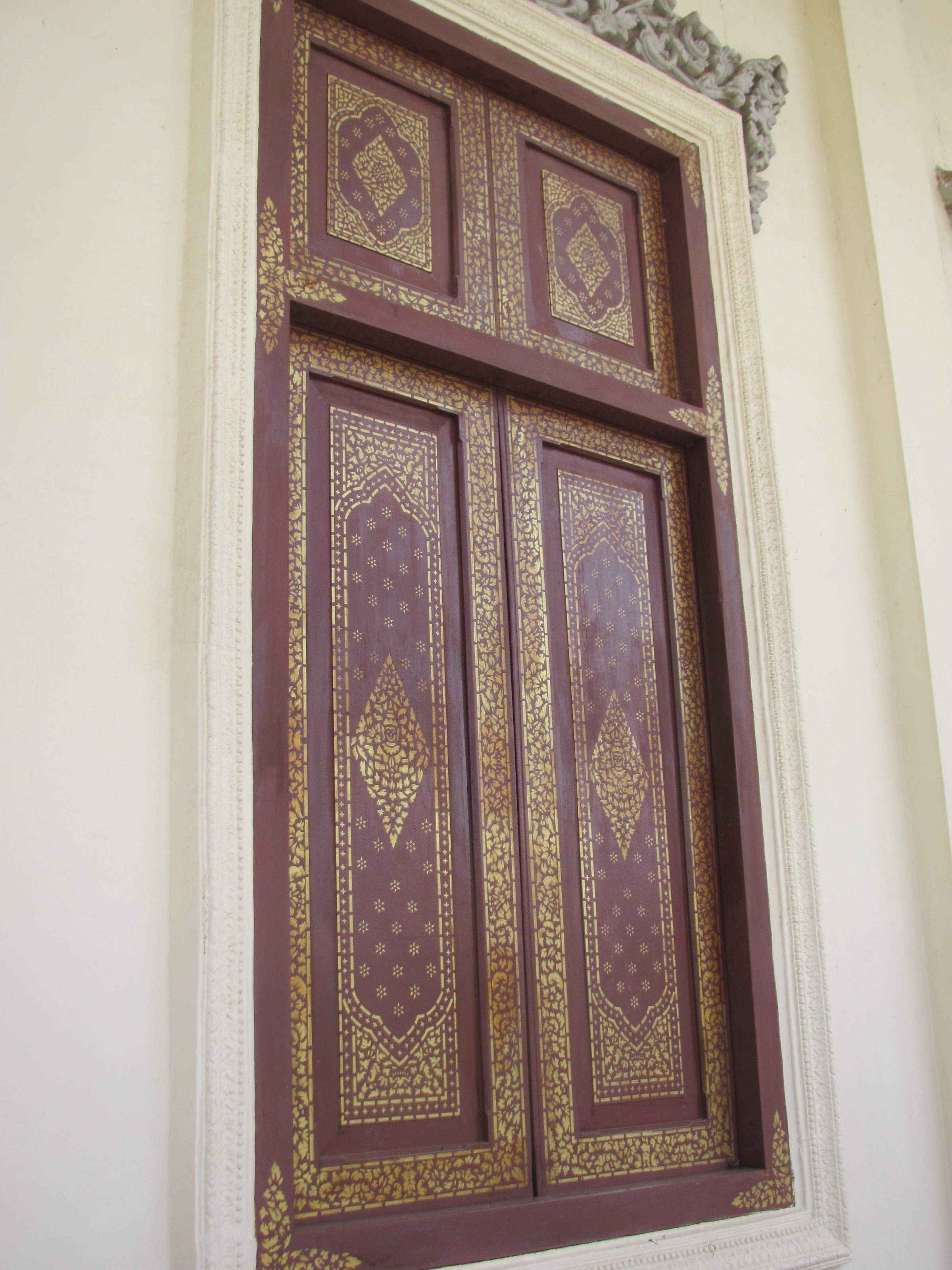 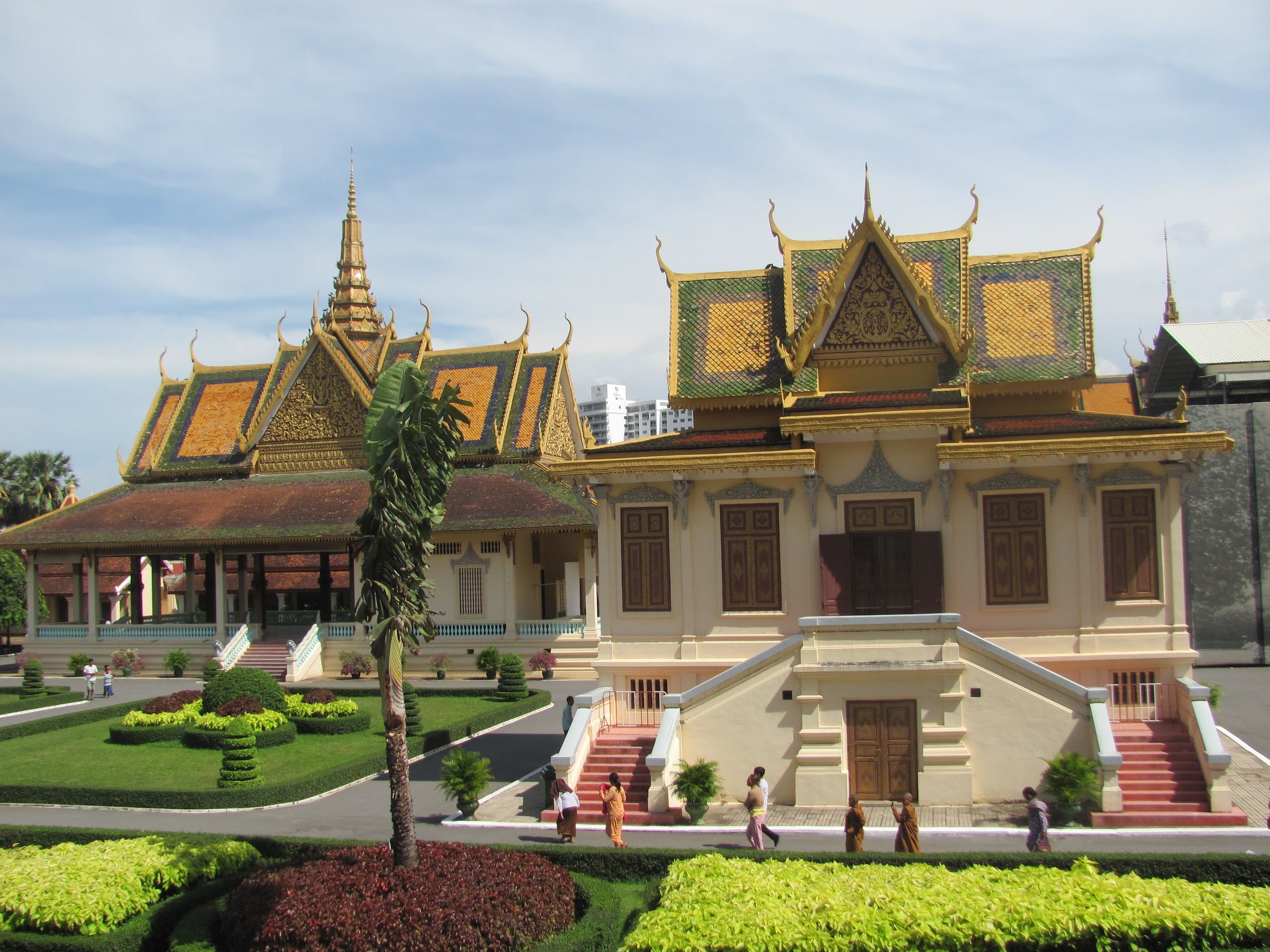 This is the Dancing Pavilion used to host dance performances and royal receptions.

There are many statues of Buddha and the ceilings and pillars have paintings of Buddha as well. 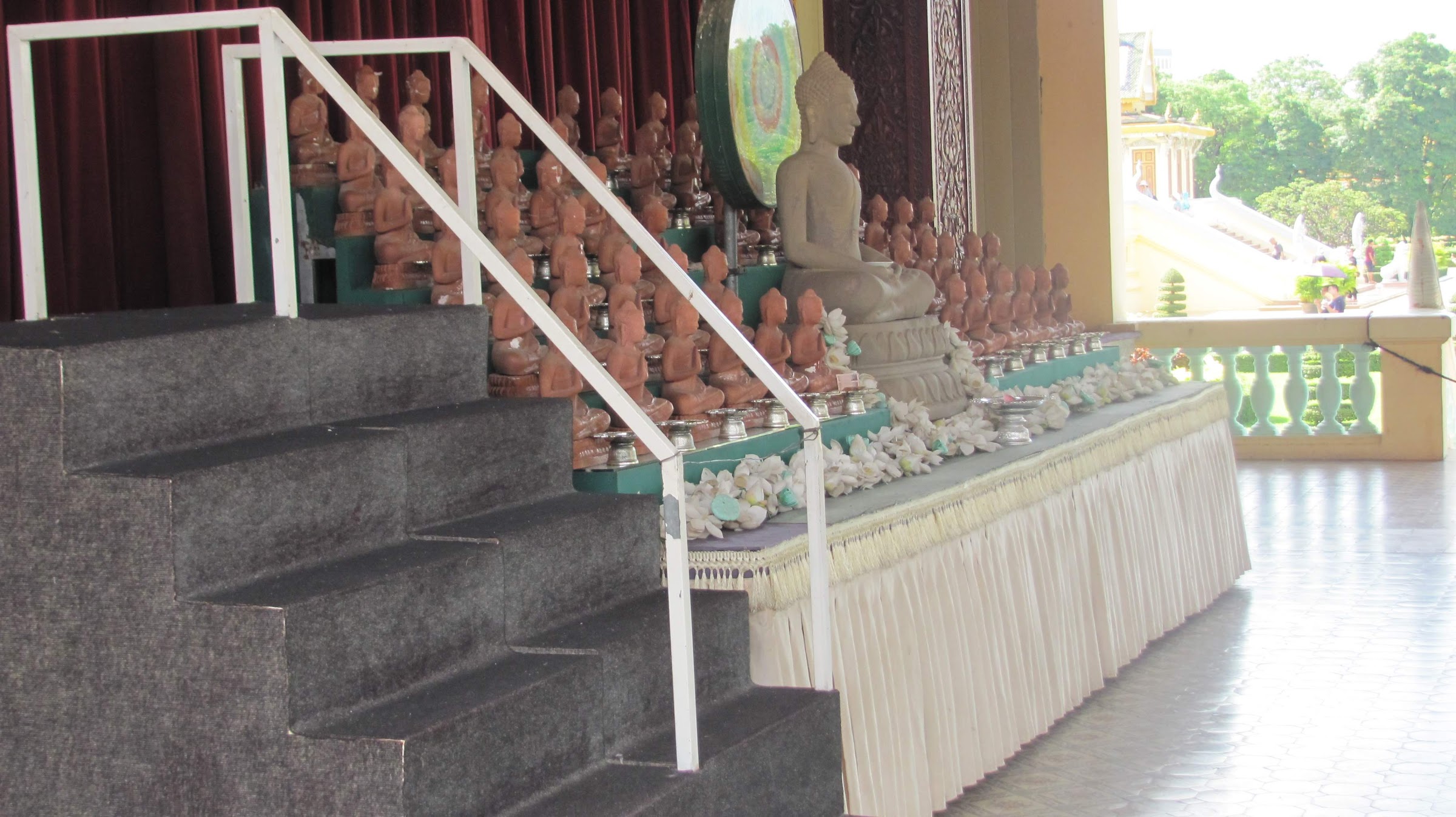 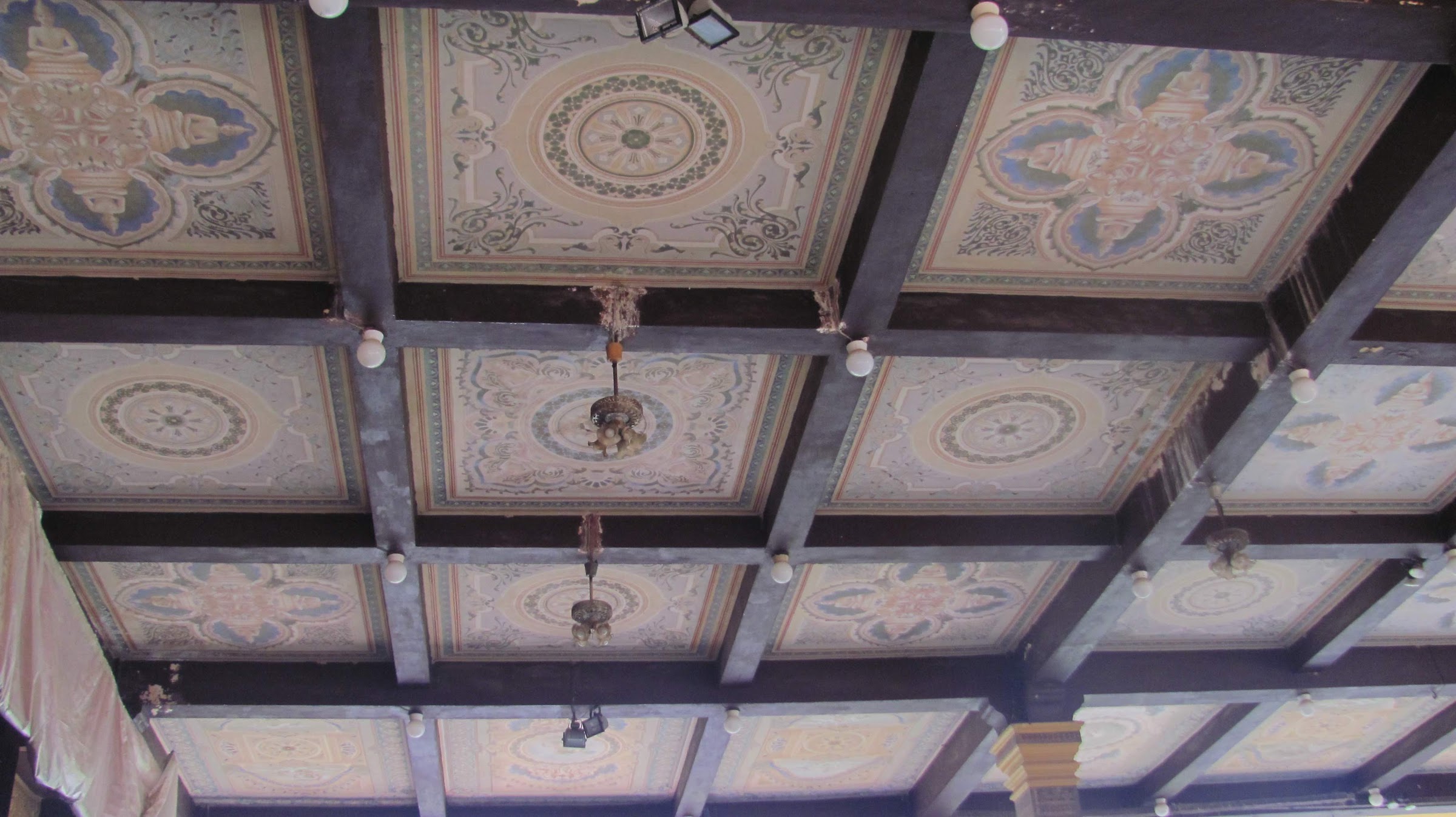 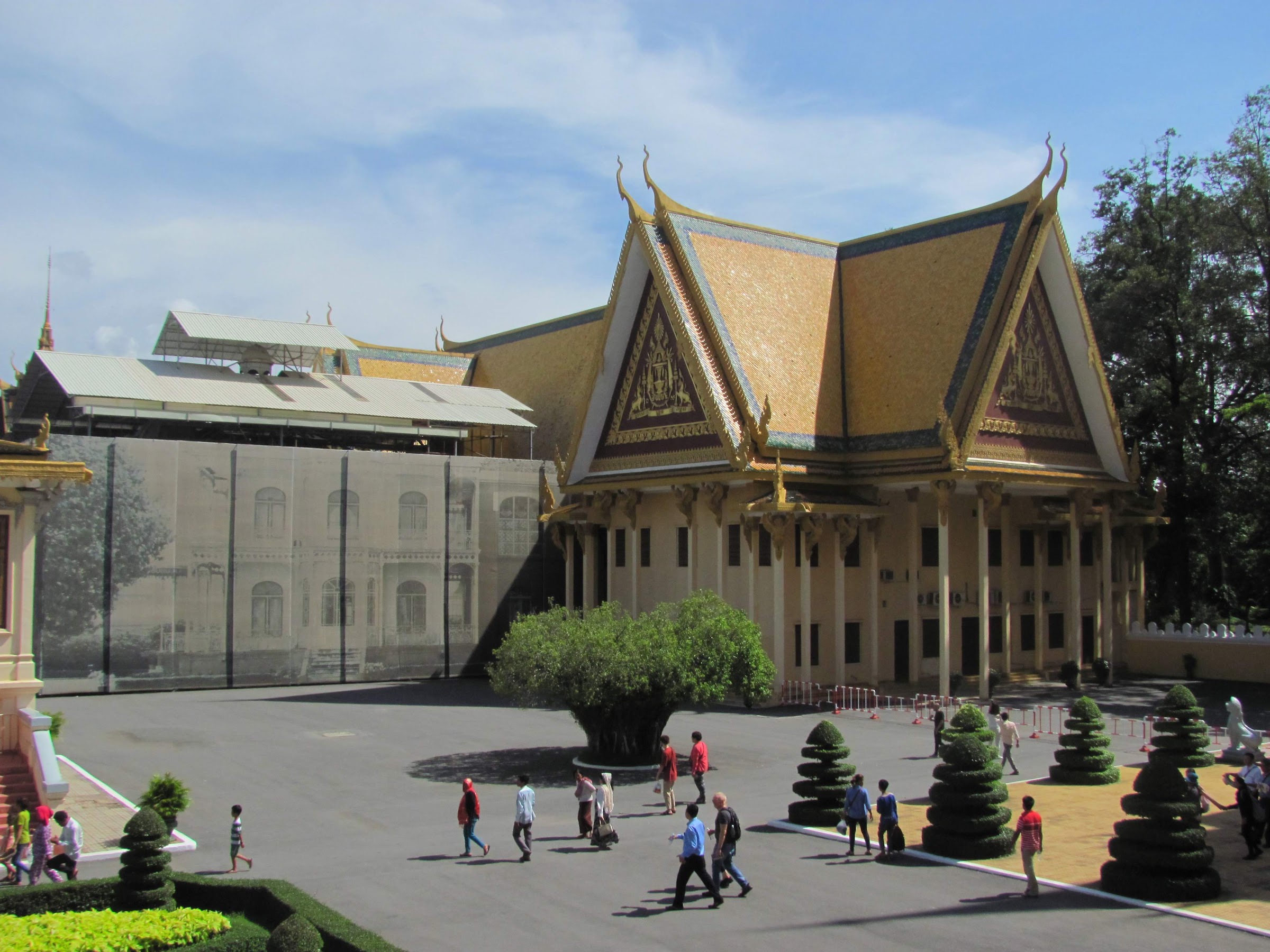 An office building under renovation This temple houses many Buddha statues including crystal and emerald ones. While it is written in books that this temple has silver tiles on the floor, those are not visible. Various silver and gold articles like silver fruits and vessels are also displayed inside the temple. Photography is not allowed inside this temple as well.

There are several stupas like these dedicated to erstwhile kings. 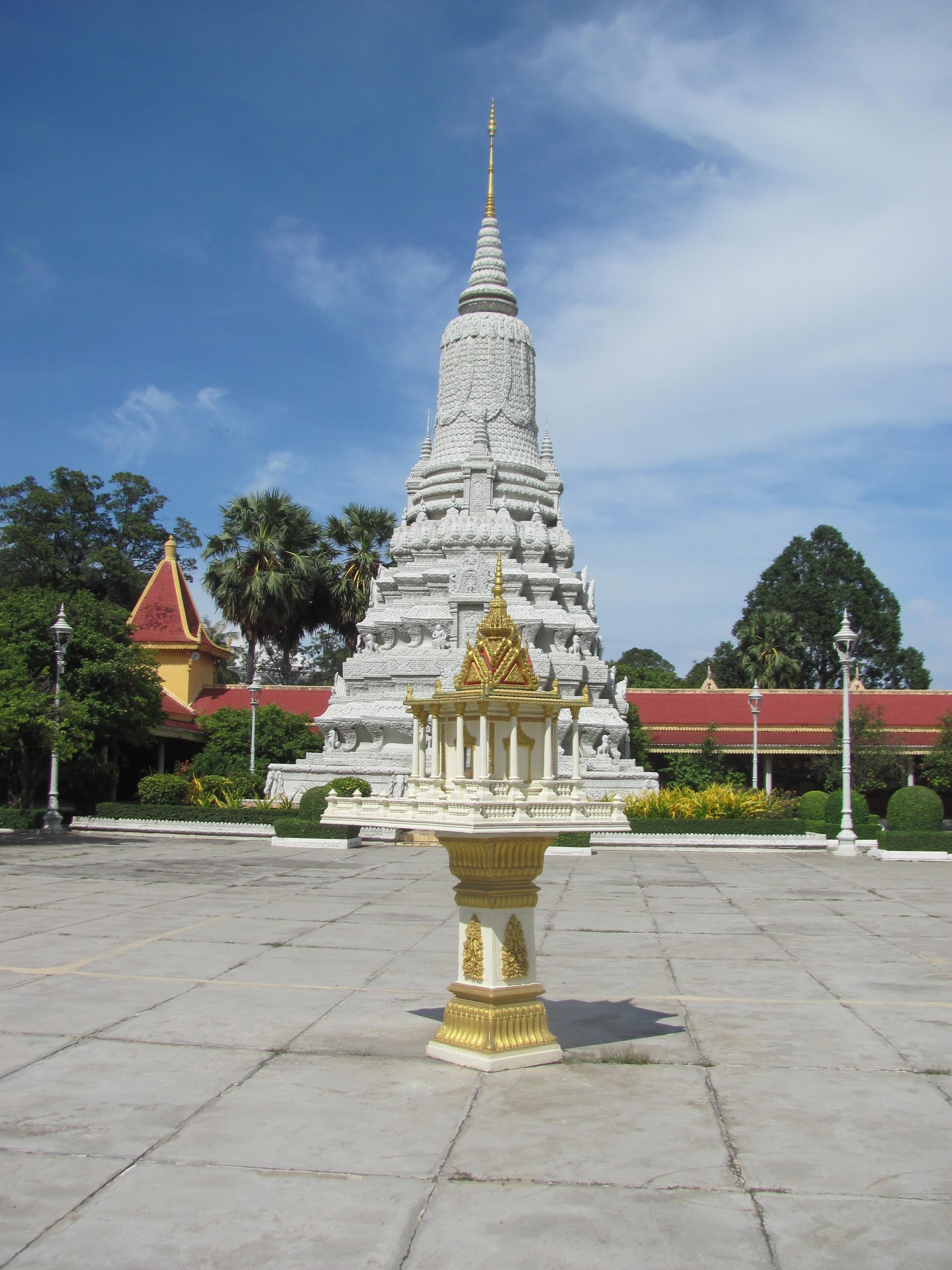 A model of Angkor Wat temple, the real grandeur of Cambodia, is present inside the palace complex. 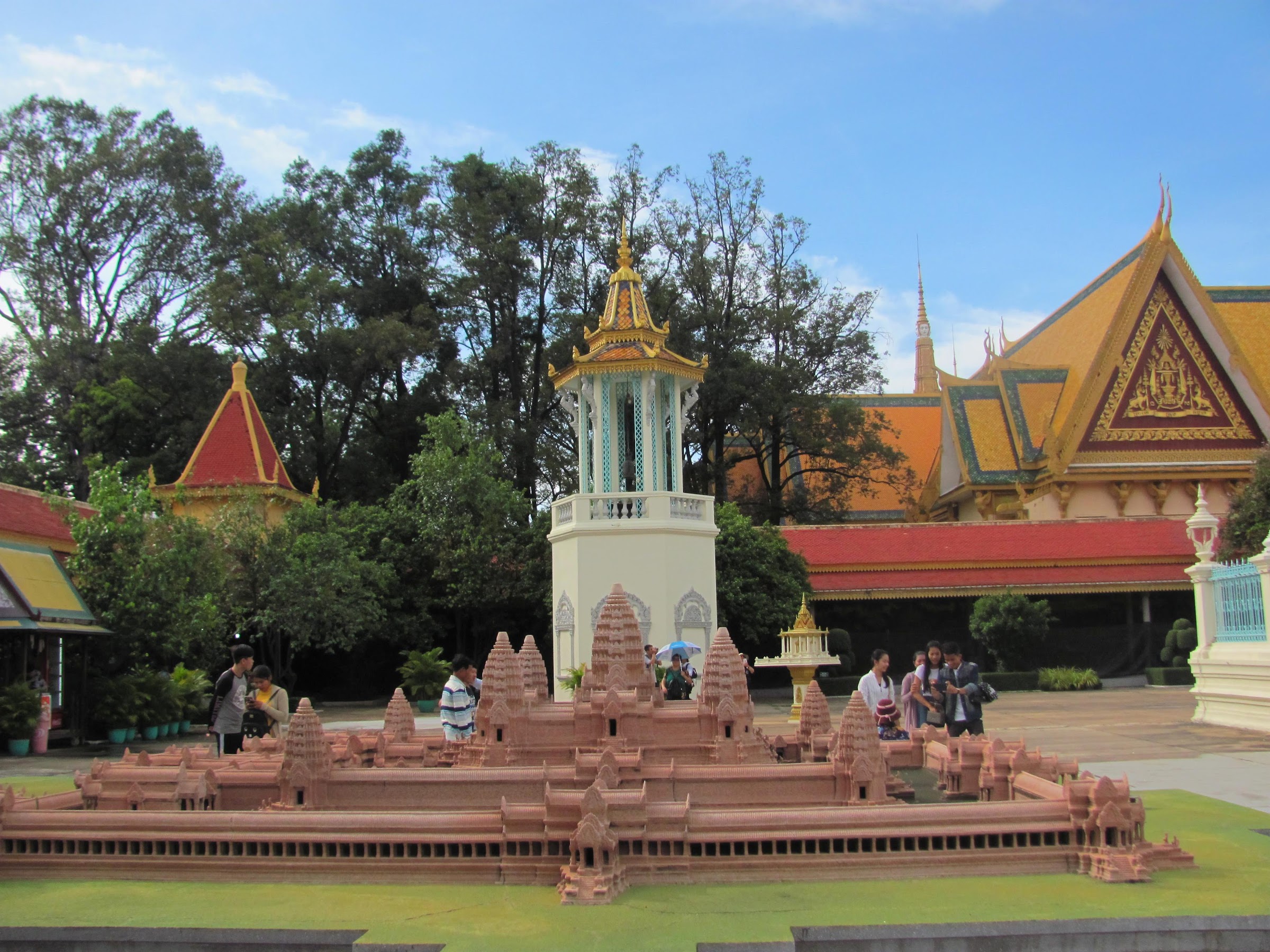 The Pavilion of Napolean, which is supposed to be influenced by European style of architecture was closed for renovation when we went.

A panel full of colourful murals of scenes depicting Reamker (Khmer version of Ramayana) is present on the courtyard walls. These were painted in 1903-04 and are already not in a good state. 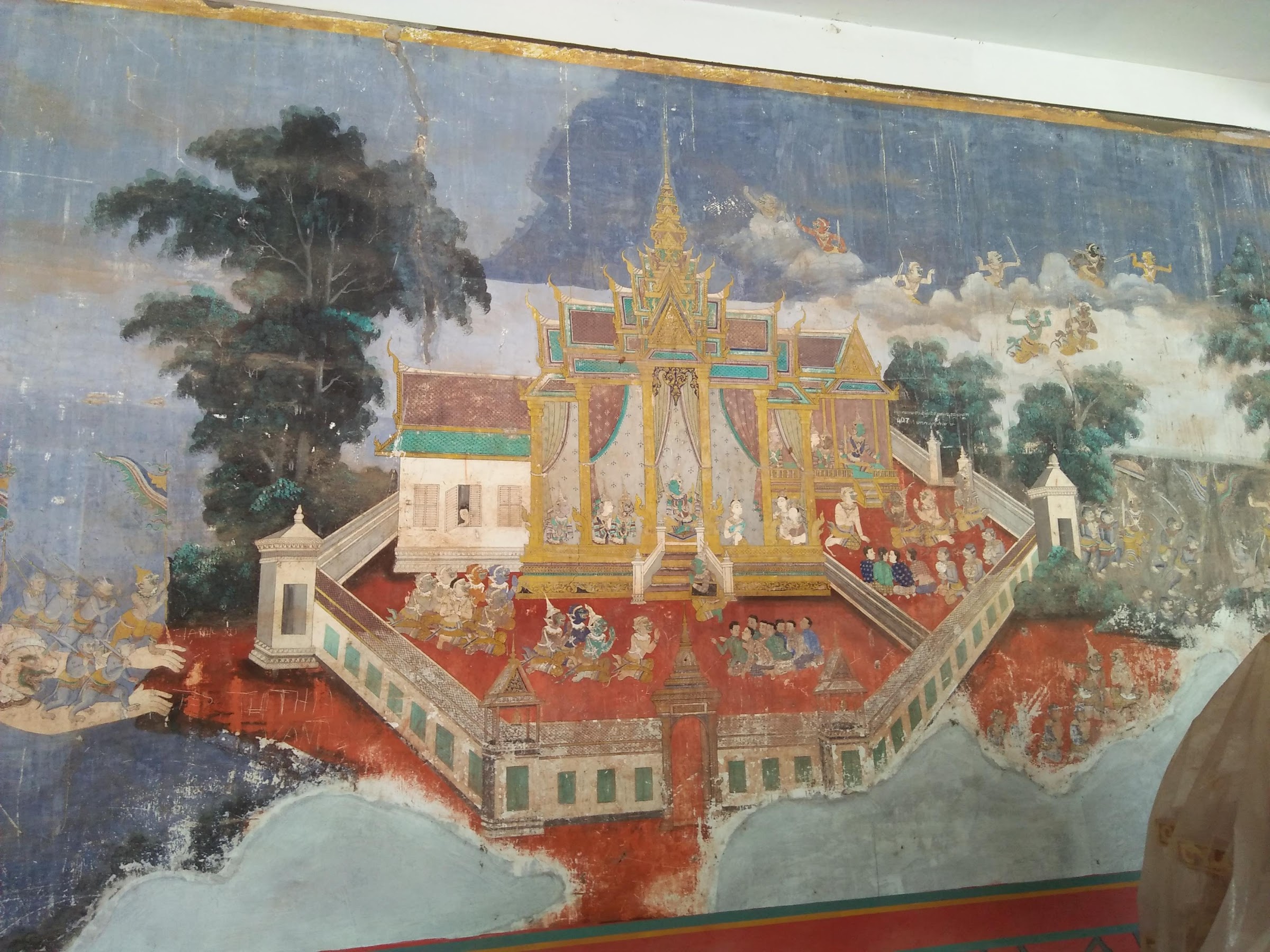 There are many other buildings which house the royal serveware, utensils, Buddha statues, clothes, paintings and pictures, etc. 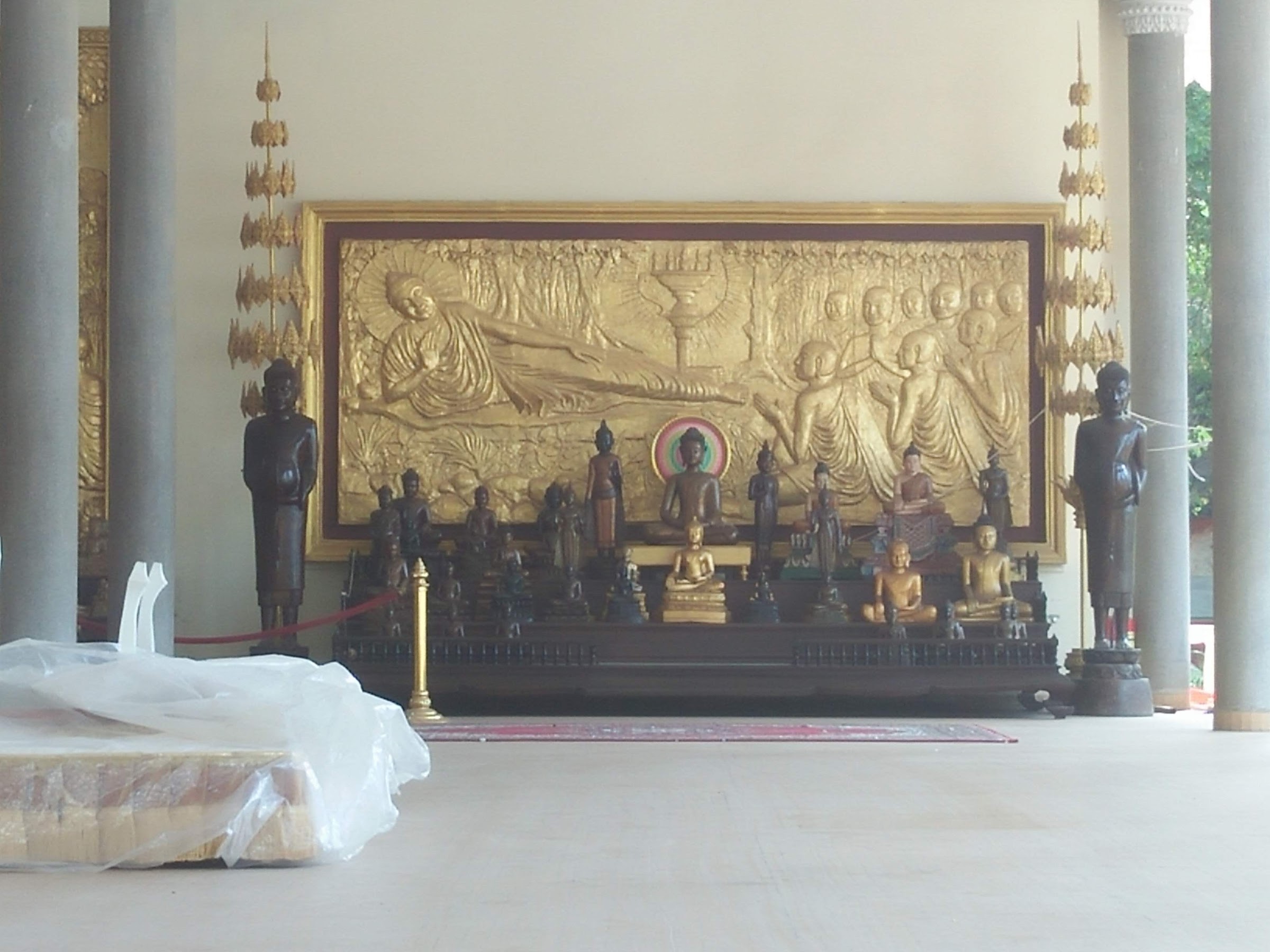 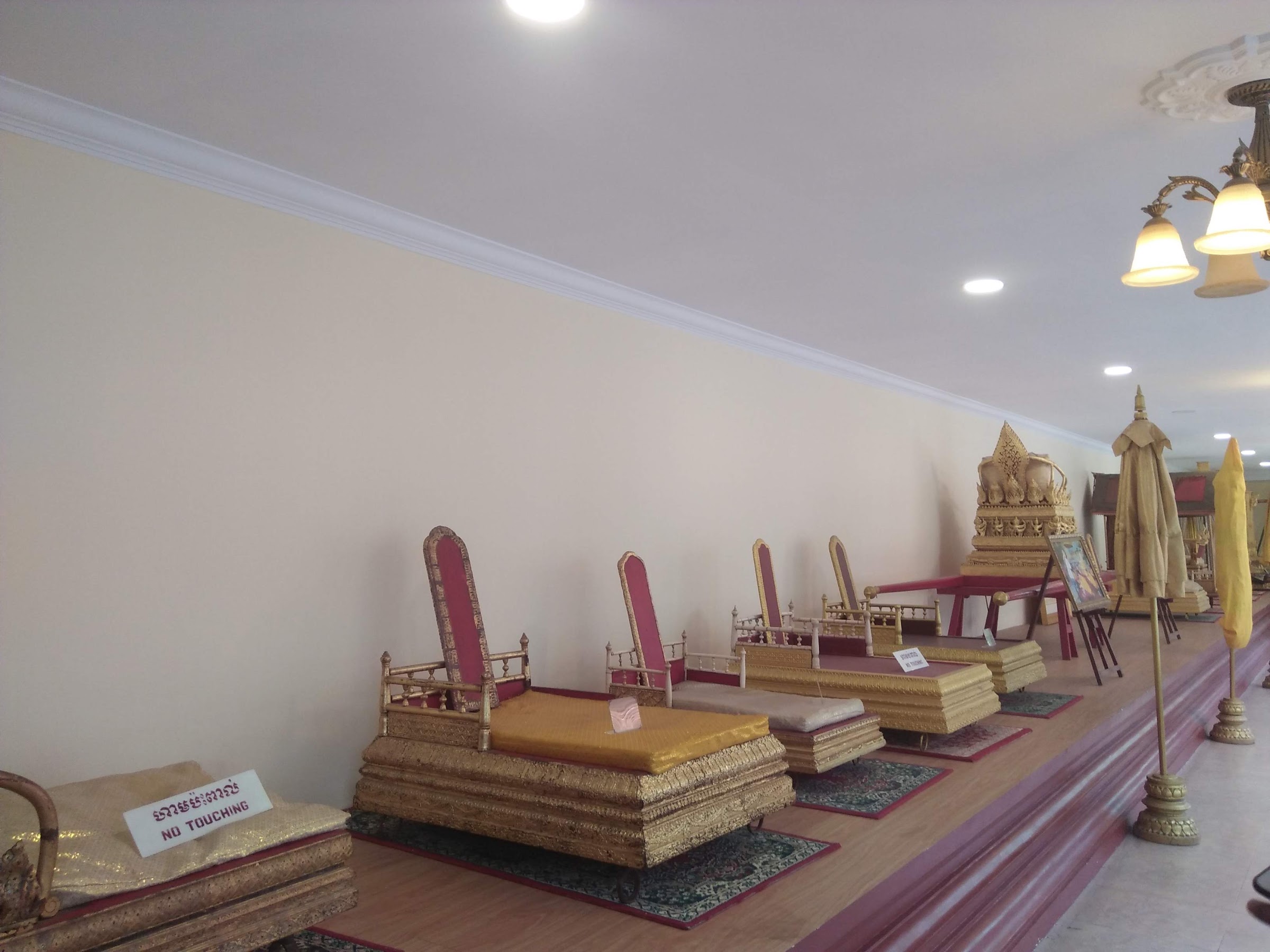 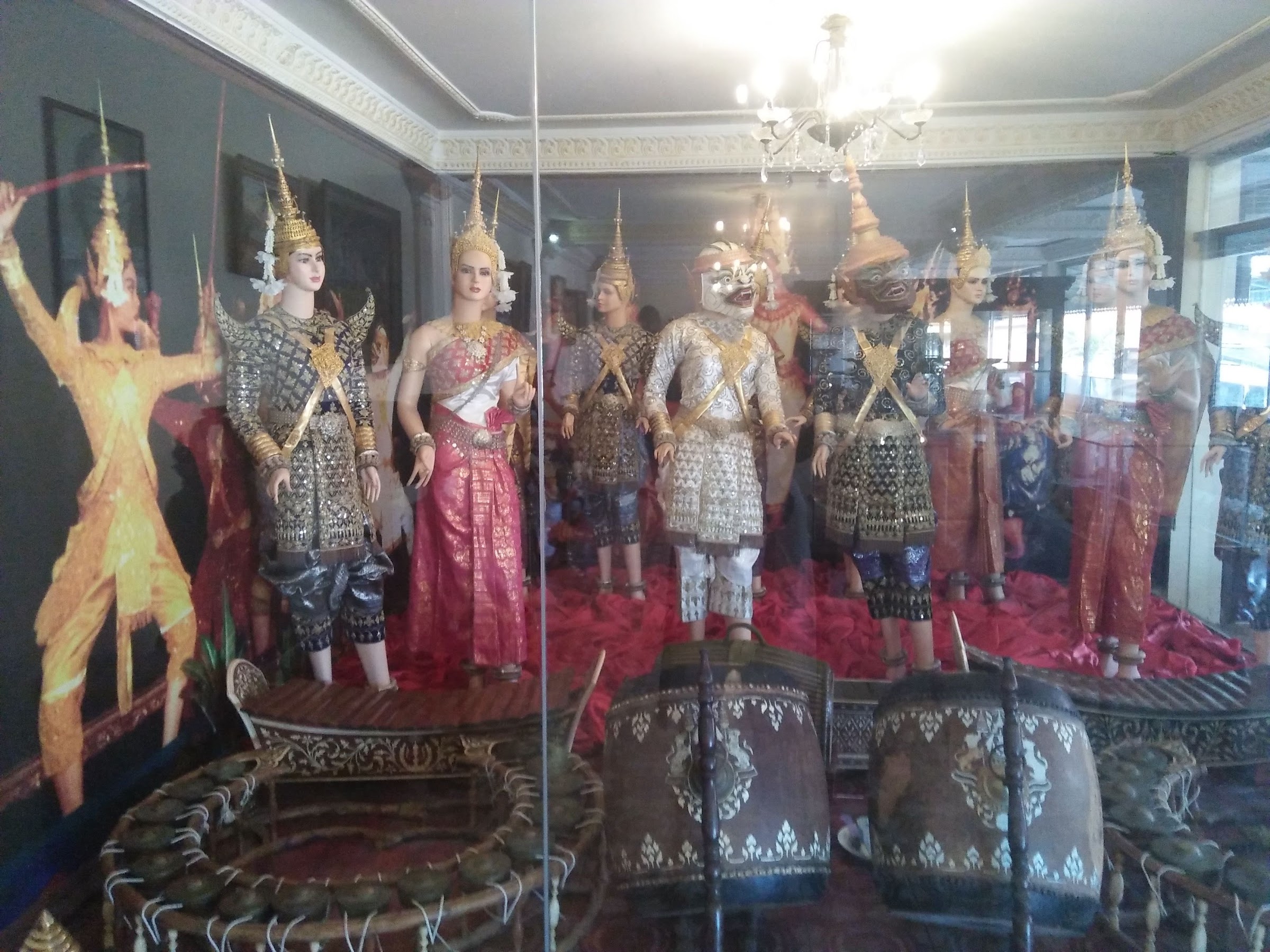 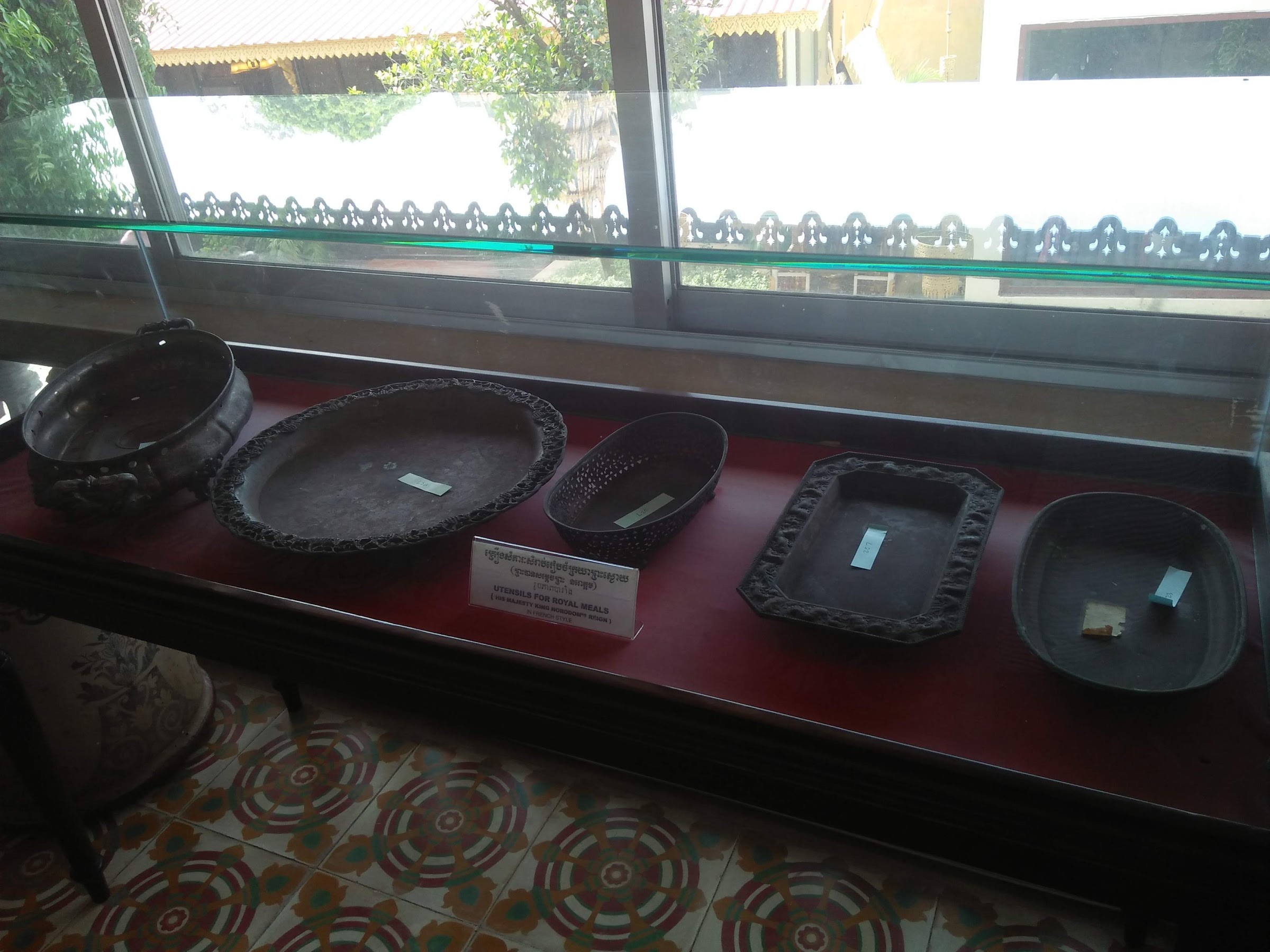 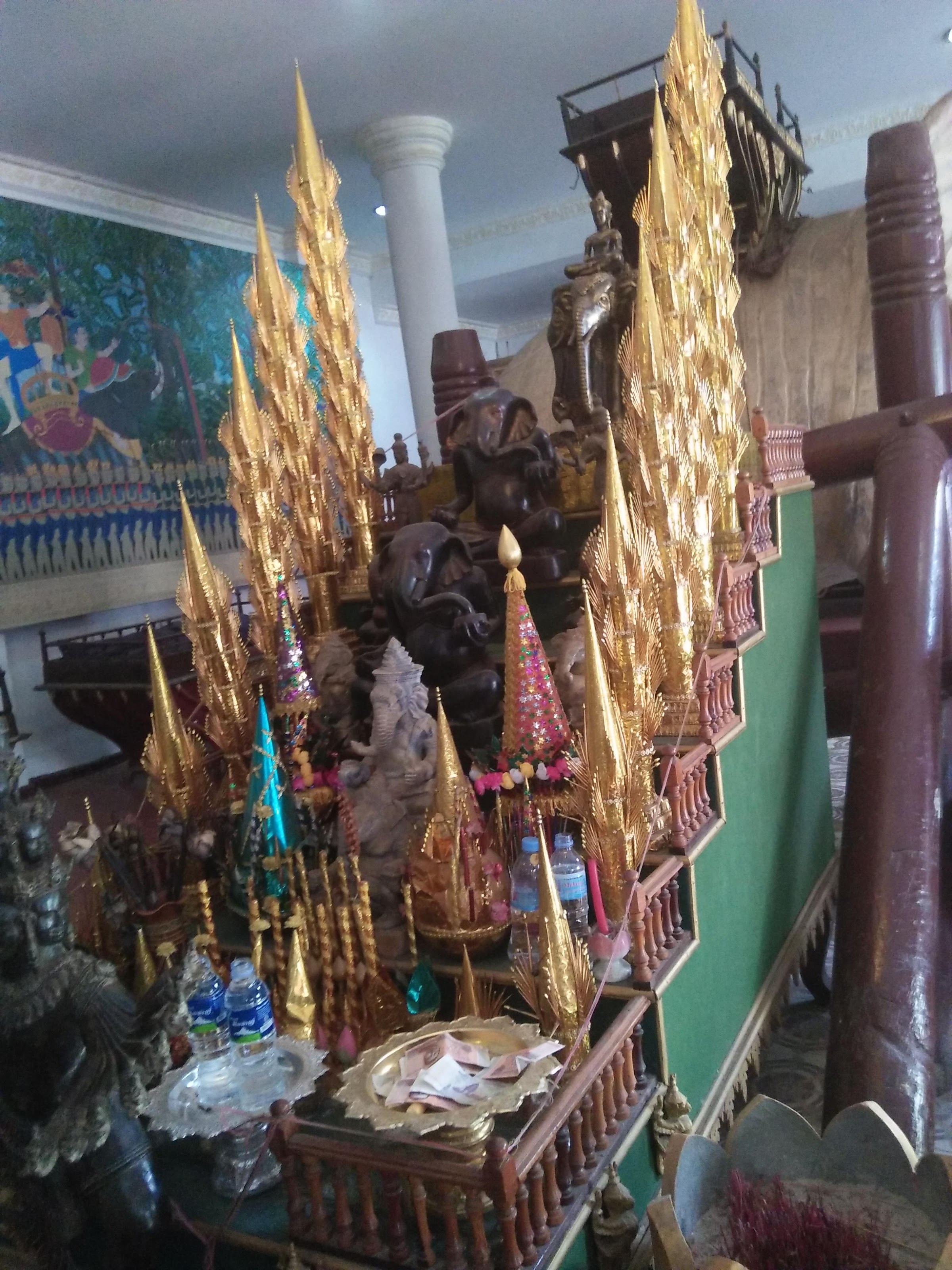 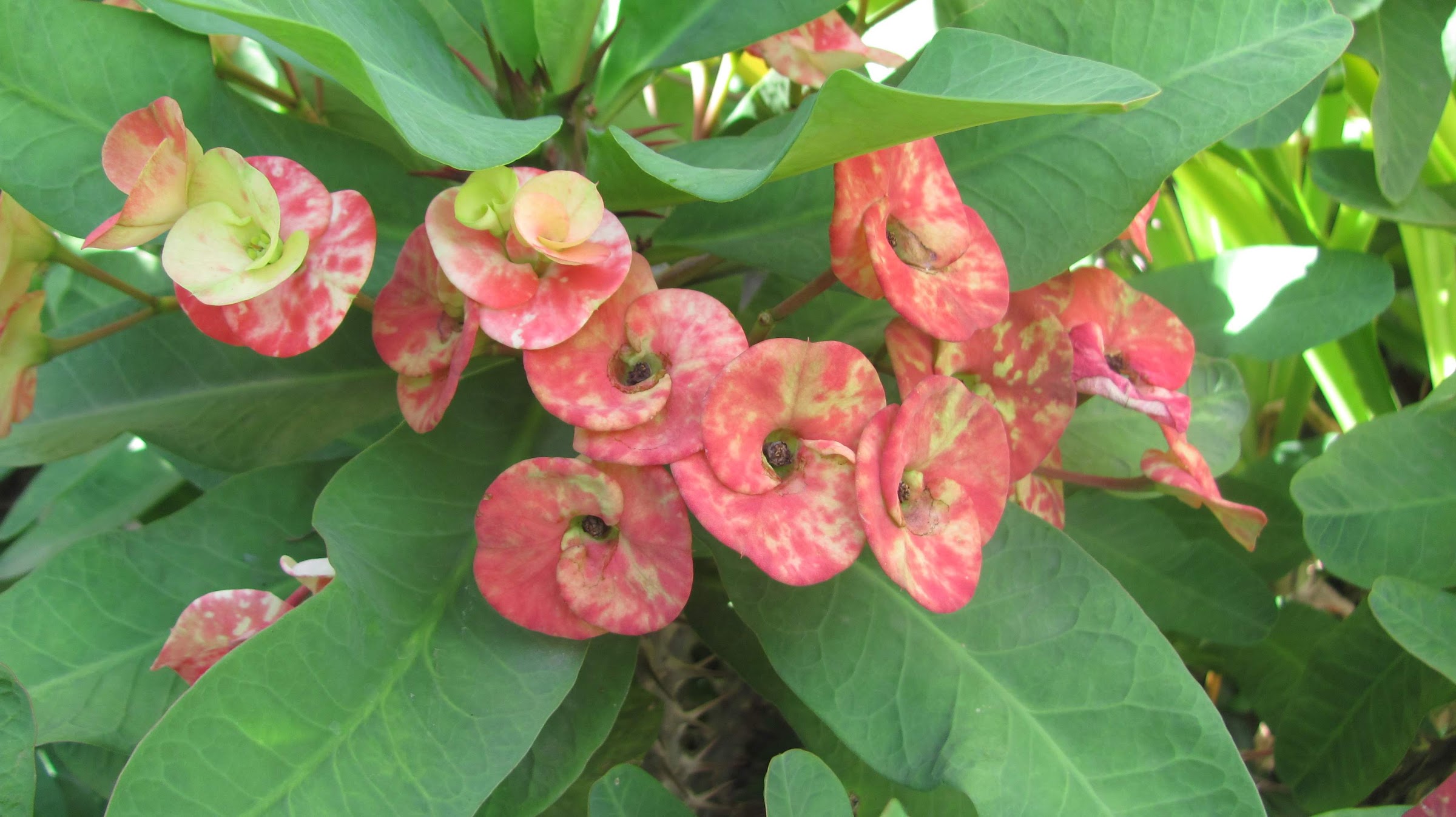 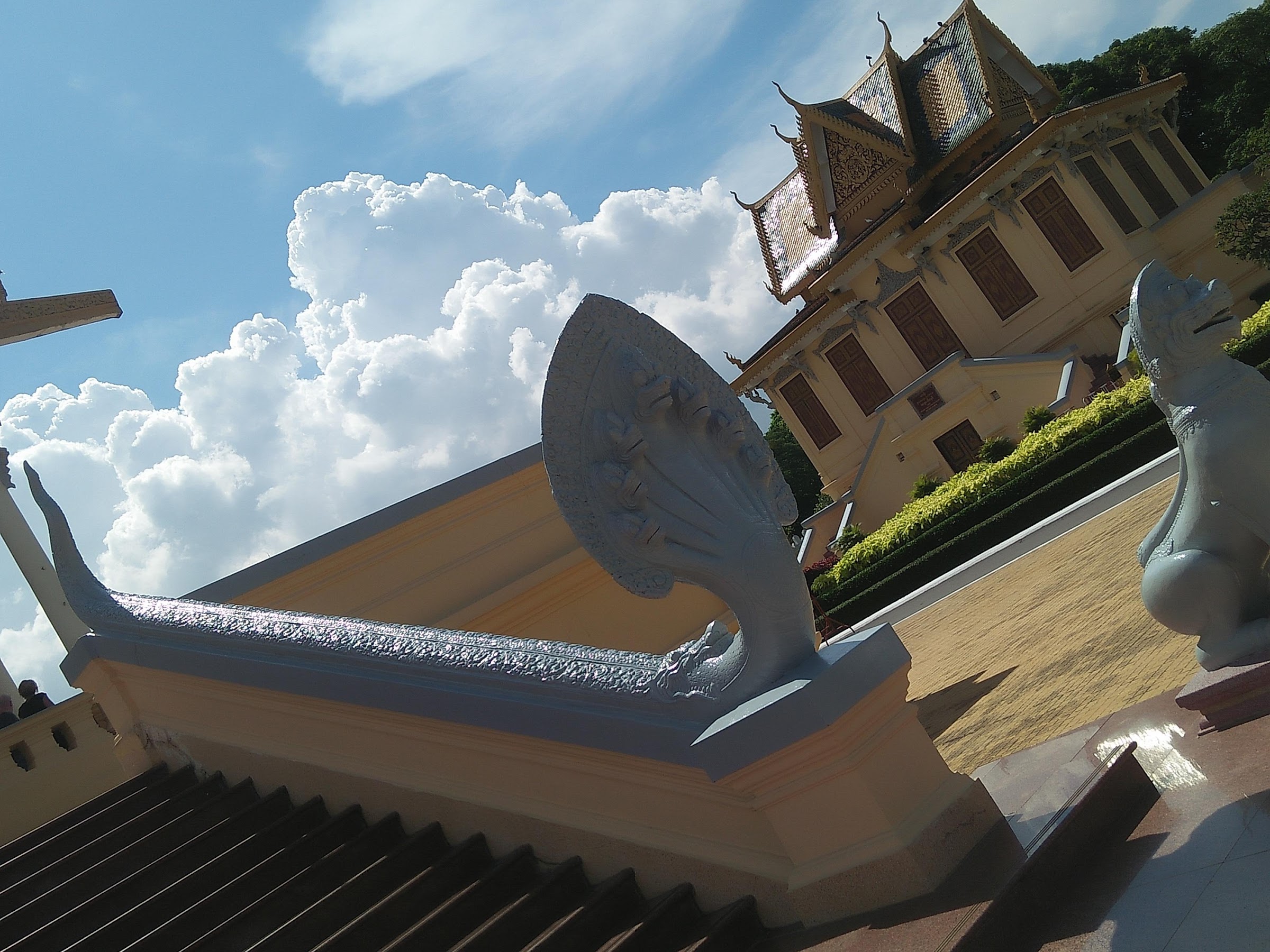 The seven-headed snake is a regular feature in all the ancient temples of Cambodia including Angkor Wat and is also seen all over the country in everything from its currency (Riel) notes to pavements of the bridges on roads! With the tail of the serpent representing the earth and its seven heads representing the seven colours of rainbow, it apparently acts as a gateway to heaven in itself!

Statues of Garuda (the bird vahana of Lord Vishnu) adorned certain buildings. Garudas are present everywhere in the ancient Cambodian temples too. 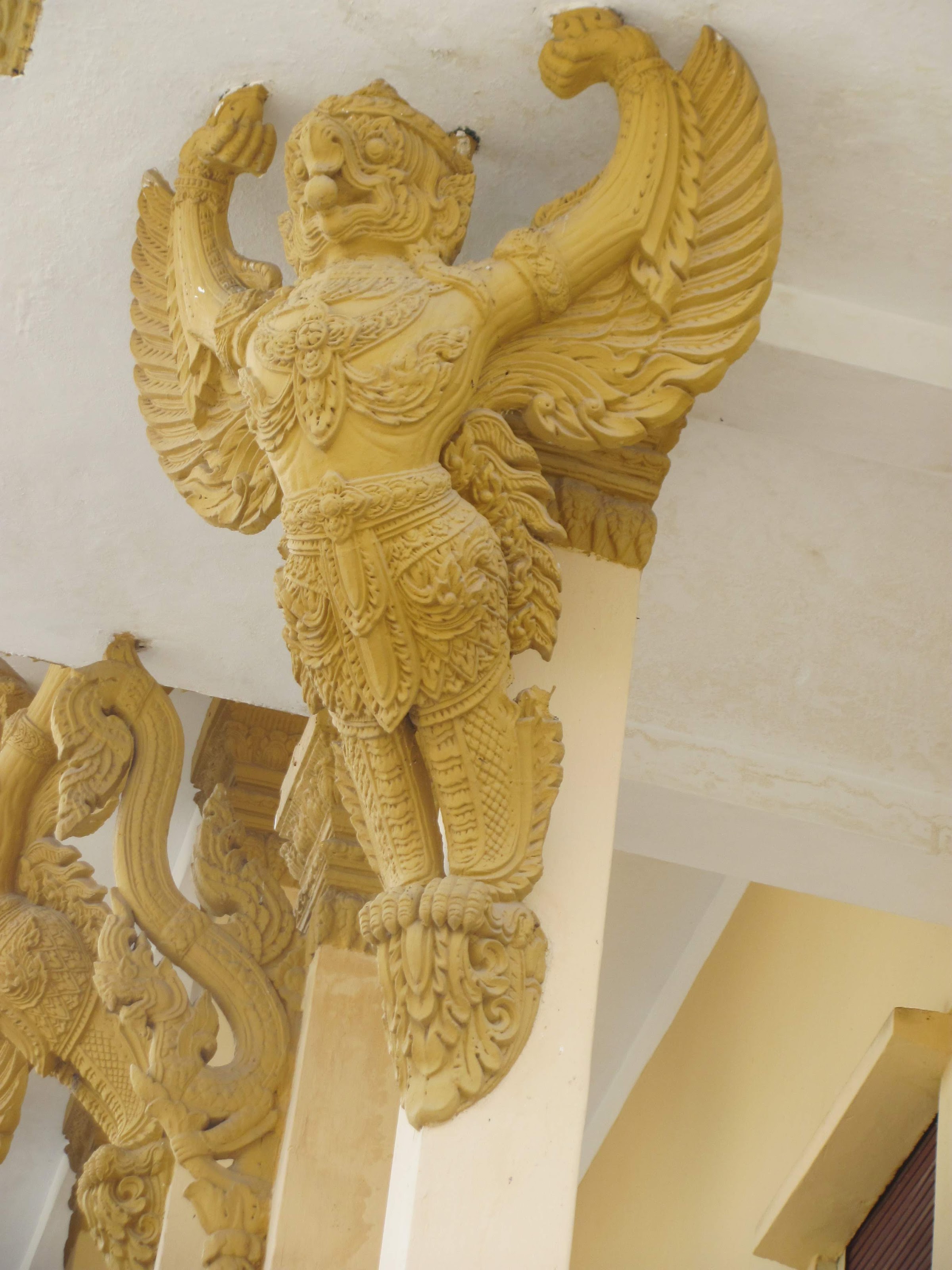 Churning of the Ocean of Milk (paarkaDal)

The famed ‘Churning of the Ocean of Milk’ scene which is featured in all the ancient temples of Cambodia is present as a very beautiful wall panel near the exit of the palace complex. Vishnu as a tortoise (Kurma avatar) and the devas and asuras/ demons churning the ocean from both sides are seen. 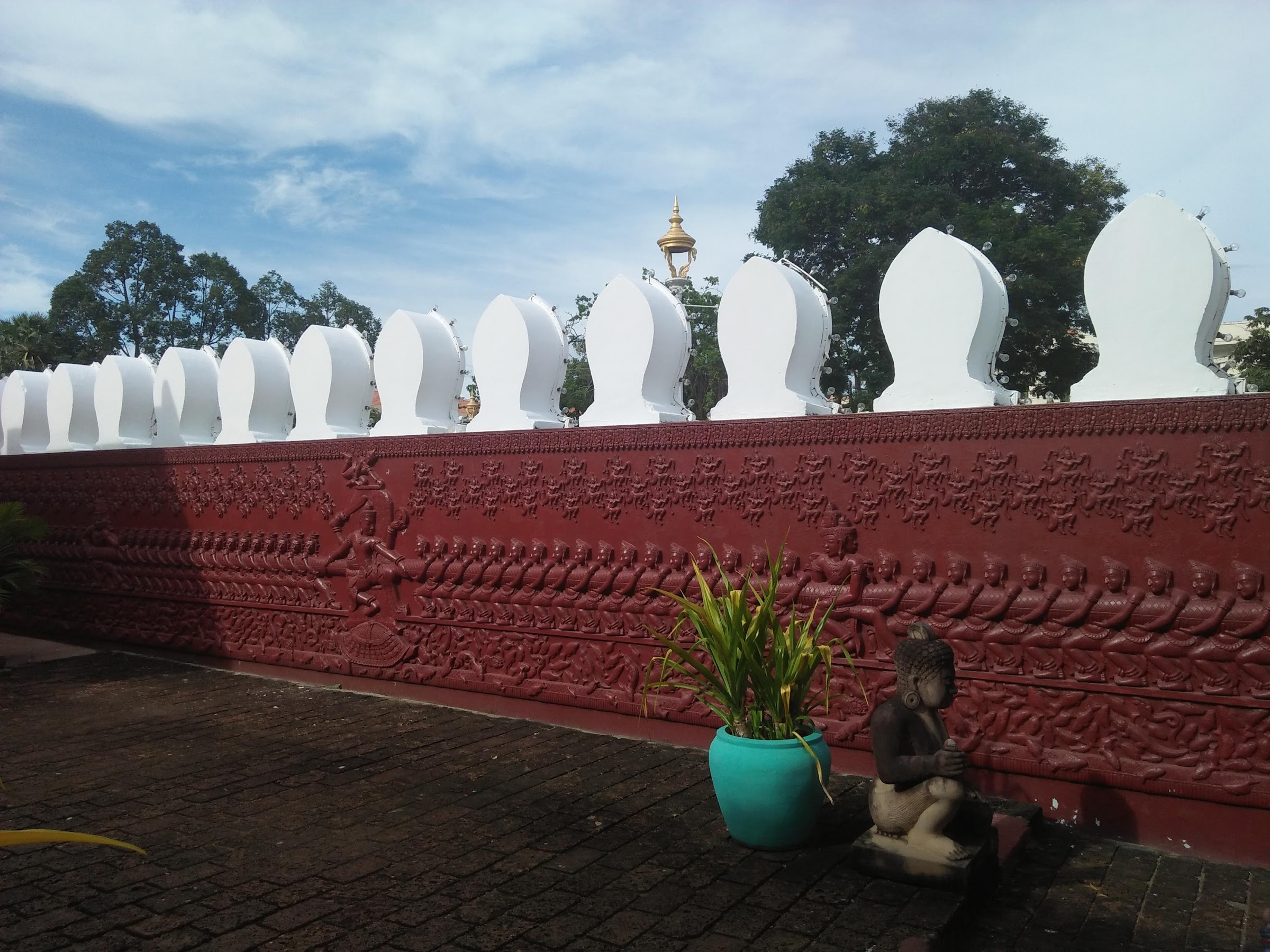 With this, the palace complex came to an end. It took us a little more than an hour and a half to see the entire place.